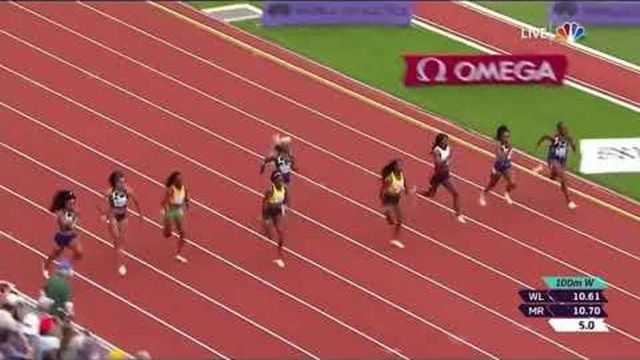 One of the bigger stories out of the Olympics this year involved US champion sprinter Sha’Carri Richardson missing out on the event due to testing positive for marijuana, and how it was an absolute travesty that such a promising young athlete could miss out on her big moment just because she smoked a little weed.

Well Sha’Carri AKA the ‘fastest woman alive’ finally made her return to the track over the weekend, and um… she got smoked. And when I say smoked, I mean she came dead last:

Brutal stuff. I’m not going to pretend like I know anything about the sprint game but coming in NINTH your first race back after all that controversy and Tweeting stuff like “miss me yet?” is just not a great look at all really.

Worse still, one of her competitors went viral afterwards for walking in the background of Sha’Carri’s interview with the smuggest look ever on her face:

Damn. On a more positive note, Sha’Carri says she welcomes the shit-talking and assures she’ll be back with a bang:

“Talk all the sh*t you want” – Sha’carri Richardson pic.twitter.com/XQRzy1cODn

Talking like that after coming 9th in your comeback race? Have to respect it I suppose. In fact she was happy to talk about her L all night long…

Some of Sha’Carri Richardson’s comments after the 100m.

It’s worth your time. pic.twitter.com/KR9Tc2DVY8

Well, whatever the case, it’s still a joke that she was banned from the Olympics because she’d smoke a little weed, which we all know does not give you any kind of sporting advantage. In hindsight though, maybe it was a good thing. See you in 4 years, Sha’Carri!

For the runner who qualified for the Tokyo Olympics while wearing bags of Doritos as earrings, click HERE. Now that’s how you lock down a big brand sponsorship.