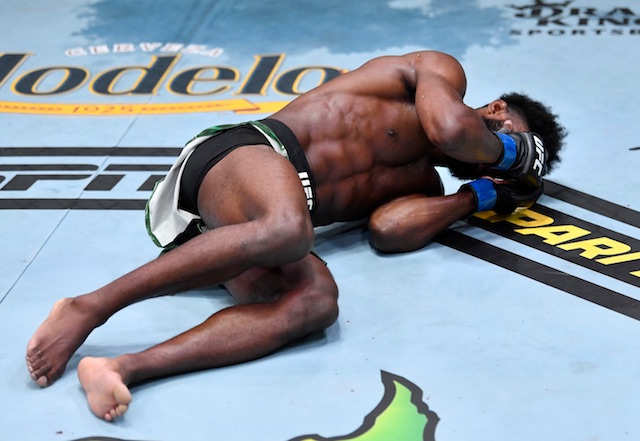 Was he faking it?

I don’t normally cover UFC too extensively in these pages unless there’s an amazing knockout or something, but one of the most controversial title fights in the history of the sport went down over the weekend when Aljamain Sterling won the bantamweight title in bizarre fashion after Petr Yan was disqualified for an illegal knee.

Sterling was still on the ground when Yan kneed him in the face and it was eventually determined by the ringside doctor that Sterling had suffered a concussion and was unable to continue, handing him the title, However, several UFC fighters have already jumped in to accuse Sterling of faking this concussion in order to win the fight and the title.

Take a look at the footage below and then see what people are saying about it underneath that too:

The doctor has called off the fight after speaking to Aljamain Sterling, who was struck with an illegal knee by Petr Yan at #UFC259 pic.twitter.com/oRLduQfraV

He got concussed and he couldn’t fight but he could conduct a full ass interview and tweet after… this is why an Olympic gold medal is greatest accomplishment an athlete could do! But hey @funkmasterMMA at least you know you could make it Hollywood. And I’m not evening hating pic.twitter.com/YNUUMRfbvs

And the Oscar goes to @FakeMaster for Best Actor in a Title Fight and Petr Yan needs a crash course in the rules of the sport he was once champion in. Hey Petr now you’re a cheater too, bitch.

Why the fuck interview him, if he is so concussed ??

Why the fuck interview him, if he is so concussed ??

Really weird situation there and I’m not entirely sure who to believe. Sterling kinda seemed upset and confused that the fight was called off and he ended up winning the title, but the fact that all of his peers in the fight game think that he was bullshitting does lend a lot of credence to that idea.

I guess nobody can ever really know except for Sterling himself, but no doubt these accusations are going to follow him around for the rest of his career unless he manages to shut them down or do something about it. Not entirely sure how he goes about doing that either.

For more of the same, check out the best memes of Conor McGregor getting knocked out at UFC 257. Ouch.