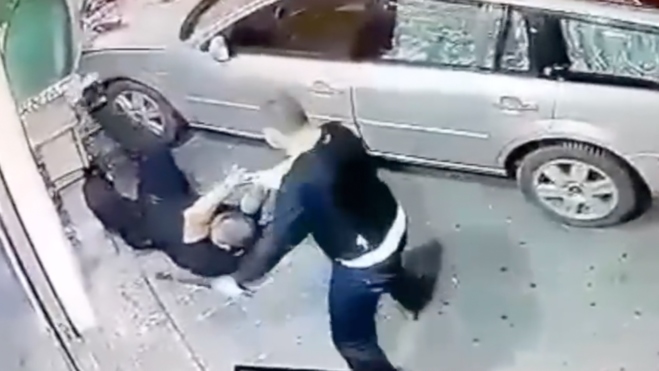 This video went up on a couple sites earlier but it’s Liveleak who has some background info on the situation, which I’ll share before posting the video.

On the night of October 12-13, in the city of Vrana, located in the south of Serbia, there was a series of showdowns, ending with a family vendetta. The culmination of the confrontation hit the lens of a street surveillance camera.

It all started with the fact that four men beat a 21-year-old local resident resting in an entertainment institution. The injured, among other injuries, who suffered a nose fracture, came home, where he met his father.

The parent, who clarified the circumstances of the incident, put his son in the car and went in search of offenders. One of which was discovered standing on the sidewalk near a cafe.

The father of the beaten-up man demolished a 42-year-old man named Boban with his car, after which relatives began to beat him with batons. Along the way, and got friends Boban, who tried to stand up for the defeated comrade.

According to local media , a citizen who was suddenly attacked was subsequently hospitalized with severe injuries.

Last Monday, October 14, the vengeful dad was detained by law enforcement officials. Other participants in the conflict, including the fight where the son of the man who was taken into custody was beaten, will also be punished.

OK, ready? Be warned – this video is not for the faint of heart:

I had watched the video first without knowing any of the context and knew it must have been something deadly serious to warrant such a brutal beatdown. I mean imagine running a guy over in your car, bashing him in the head with a weapon a bunch of times and STILL not being satisfied? I guess that’s why you shouldn’t mess with a Serbian man’s kid.

For the Ukrainian man who reversed all the way back up the road to knock out the geezer who spat on his car as he drove by a zebra crossing, click HERE. These Eastern Europeans don’t play.