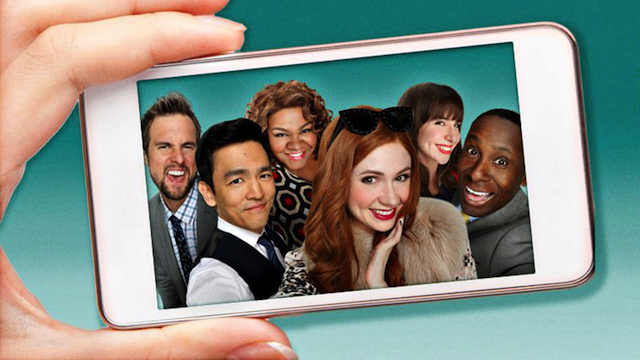 There have been a lot of shit TV shows since I’ve been alive, but this looks like the worst of the bunch.

The phenomenon of the selfie has pretty much taken over modern life in the past couple of years, so much so that it’s now in the Oxford dictionary and even has its own song, but I don’t think anyone expected that there would ever be an actual TV show based around it. Bad news though – there is, and it looks supremely terrible.

I’m not sure if you can be bothered to sit through three minutes of this crap trailer like I did but it might be worth doing if you’re an aspiring writer/director and want to know how NOT to make a TV series. Having said that, it did get green lit and go into production, so maybe this is just what bozo execs at stations like ABC look for in a new show i.e. ‘is it based around something that was the biggest ever retweet on Twitter? Are kids talking about them all the time in hip places like Williamsburg and Bushwick? Do I not understand it one single iota? Great –  let’s do it!’

The plot – if you can call it that – revolves around some super annoying girl who was fat and ugly in school and didn’t have any friends, but then lost a bit of weight and really got into social media, allowing her to become what the show terms ‘instafamous’. For some reason though (this really isn’t explained in the trailer) it isn’t all it’s cracked up to be and so she enlists Harold from Harold & Kumar Get The Munchies (who’s a millionaire or something) to teach her about the real world and how to be a real person.

Yes, you’ve probably already guessed that they end up falling in love (the trailer wasn’t really that subtle about it either, even if it was immediately obvious) and if you’re really sharp you might even have noticed that it’s a modern take on the classic play Pygmalion/My Fair Lady. If you were in any doubt as to whether I’m making that up, then the main character is called Eliza Dooley which is a non too subtle ‘updated’ version of Eliza Doolittle.

Has the plot convinced you not to watch it yet? In case it hasn’t then you can check out the trailer where people say ‘hashtag’ all the time and also those text message icon things that show up on House Of Cards every now and again and are kind of cool show up about every single fucking second when anyone mentions a hashtag or anything that might be related to a current trend. Whereas it’s kind of cool on House Of Cards because it’s subtle and not used that much, it looks to be fully overblown here (especially the parts where the screen gets Instagrammed) which isn’t going to be funny or clever, it’s just going to be shit and make you hate the show and Eliza Dooley even more.

I fully expect this to be cancelled after about six episodes and placed in a cabinet drawer labelled WTF were we thinking in the dark depths of the ABC building.