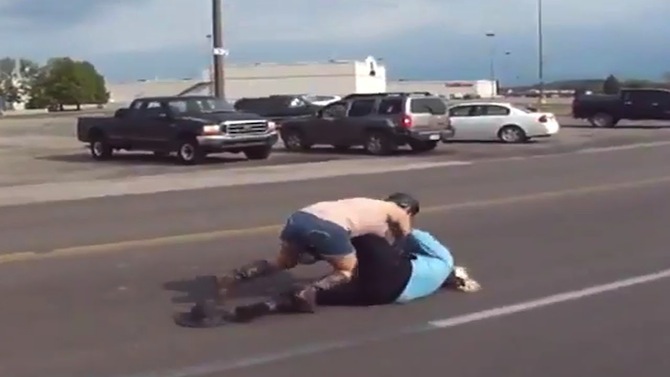 Some security guards really don’t like it when they’re being ignored. Check out this frustrated lass on a power trip as she rolls around with a butch biker girl in the middle of the street.

Being a security guard must be a tough gig. You’re in a position of authority, but then you kind of aren’t because people have a hard enough time respecting the actual police so they’re not going to take shit from someone kind of dressed like one. Especially when they seem hell-bent on stopping you doing something completely harmless, like taking pictures.

Obviously it’s not pleasant to see two females (or anyone) fighting, but this is actually quite funny. What I don’t get is how you’re going to threaten someone by counting to 10 and not have a plan of action for when you finish your count. This security guard thinks she’s so hard giving everyone the 10 count ultimatum but as soon as she gets to 8 she realises FUCK – I have no plan, no authority and am getting no cooperation from these people whatsoever.

So having backed herself into a corner like that she should probably just take the loss and leave these peeps to it. Instead she invites a ruckus with one of the biker girls standing around and they both end up exhausted after 20 seconds of fighting and just sit there until the only sane person in the video shows up to separate them (breaking it up is clearly the last thing on anyone else’s mind).

Also, you have to respect the sheer AUDACITY of trying to handcuff someone who just kicked your arse in front of 20 people who all hate you. That is what we call a no-surrender attitude.

â˜› Real Cops: Video Of Naked Man With Micro-Penis Getting Tasered & Taken Down By Cops At Coachella