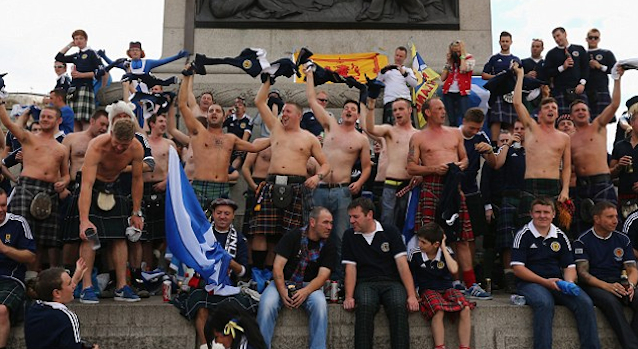 The best thing about football away days is the partying before and after the actual match and boy did those Scots have a good time in Trafalgar Square today.

I was gonna post this up an hour ago but I got a bit too excited about that dumb Sky Sports News presenter falling off a ladder outside Wembley and decided to post that instead. Still, I couldn’t ignore how fun this was and I wanted to give our Scottish fans north of the border something to laugh about after that video from this morning didn’t exactly flatter them.

Basically everyone loves football away days – even if you’re a girl or a guy who doesn’t even like football. There’s nothing better than getting up early in the morning, sinking a few cans on the bus/train, arriving in some shithole town and wandering around the streets with people you don’t really know singing stupid songs and getting more loaded before inevitably seeing your side get spanked or lose in a boring 1-0 to a deflected goal where Nikola Zigic misses a penalty (Braga away Nov ’11). If you’re feeling adventurous and you’re playing somewhere better than Barnsley or Huddersfield, you might even stay overnight and sample the nightlife, although this is far from recommended in most cases. Still, you gotta love those away days.

I’ve never had the pleasure of following England to another country – tbh I can’t really get that excited about supporting England because most of the time they’re even crapper than supporting Birmingham – but I did get to Braga as mentioned before and even though we lost it was a real fun trip hanging out with loads of Bluenoses and singing loads of dumb songs and putting loads of flags and scarves all over their square and generally fucking the place up – but in a cool way not just a braindead way where you just go out and trash everything.

And that’s exactly what those plucky Scots have done as they descended on the capital tonight for the highly anticipated (by them at least) match between England and Scotland at Wembley. The Scots have congregated in Trafalgar Square laughing and singing and probably dancing but definitely drinking and they totally pranked us English by putting Fairy Liquid in the fountain. I know it’s the oldest trick in the book but it’s still pretty jokes. It doesn’t look as if there has been any violence either – although my lawyer did say he was walking through Trafalgar Square earlier today and some Scots chased him but I think he was probably joking.

Fair play to the Scots – the most important thing on an away day is to have a good time, especially when you’re going to another country and especially when you know you’re probably going to get thumped later on. Or with this England team it’s probably more likely that they’ll lose to a scrappy goal from Danny Welbeck or something in one of the most boring matches ever.

I guess we’ll have to see in an hour and a half. In the meantime check out some of these pictures and a video from Trafalgar Square today: 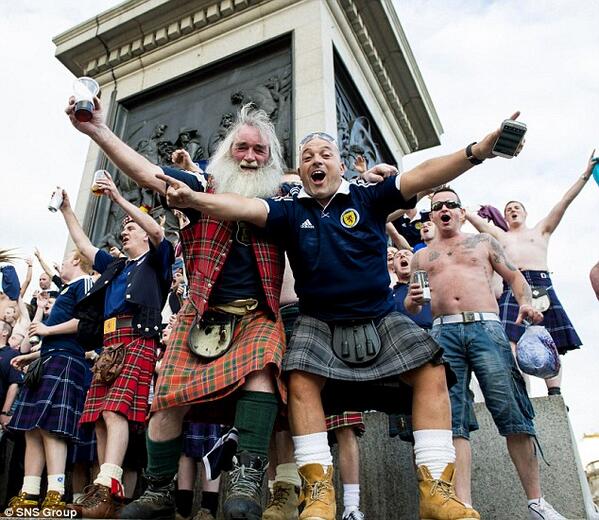 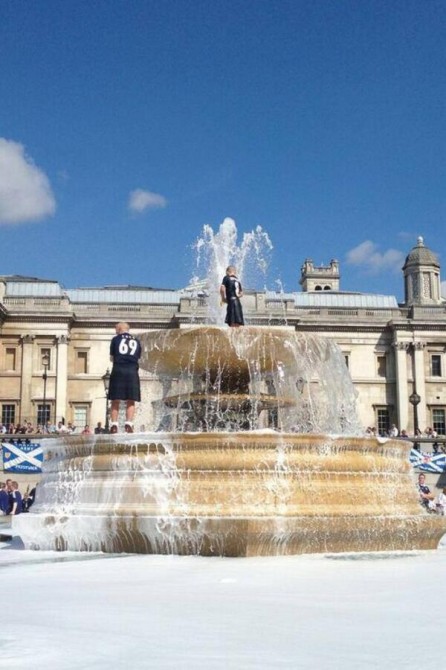 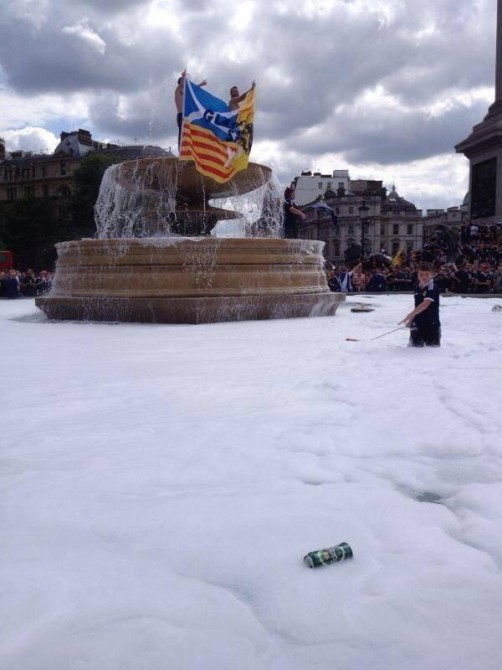