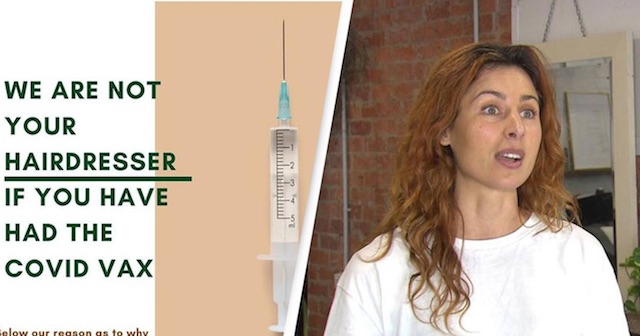 A lot of the anti vax chat seems to have died down after more and more people have received the jab and aren’t being turned into computers or having their lives irrevocably controlled by Bill Gates or whatever, but here’s a salon owner from Queensland’s Gold Coast who is straight up refusing to serve people if they’ve received the vaccination.

Yazmina Jade Adler owns the Khemia HI Vibe Frequency hair salon and took to Instagram to make her announcement about her views on the vaccine. Here’s what she had to say:

Yeah I just don’t know about that really. I suppose there are enough people throwing up concerns about the vaccine and its potential side effects that maybe we should be questioning it, but when you look at the empirical evidence it’s an absolutely minuscule amount that seem to have experienced anything negative after having it.

Added to that is the fact that Adler isn’t a doctor and says that she’s gathered her information from the ‘rabbit warren of the internet’ i.e. people with no knowledge about anything making ranty YouTube videos based around their completely unsubstantiated claims and you have to question her authority on the subject. There’s also a great bit where she says that the ‘stuff that’s in vaccines can be transmitted through spit, sweat and through the air’ that I don’t think I’ve heard even the most ardent anti vaxxer saying yet.

With all that in mind, I don’t think I’ll be listening to Adler’s advice. Thousands of people have replied in the comments praising her bravery and decision to go public with her opinions though, so it looks like there are definitely those out there who are disagreeing with my analysis of the situation. Looks like this whole COVID pandemic thing is gonna drag on a whole lot longer than we anticipated.

My biggest question about it everything here  is just how Adler plans to enforce all this? I don’t think there’s any way to tell the difference between vaccinated people and non vaccinated people other than if they choose to give you that information themselves? I guess being prominently anti vax is going to discourage vaccinated people from going there, but even so it seems like a difficult policy for her to see through. Good luck to her?

For more of the same, check out this absolutely incredible anti vaxxer fan fiction. Some people are so weird.