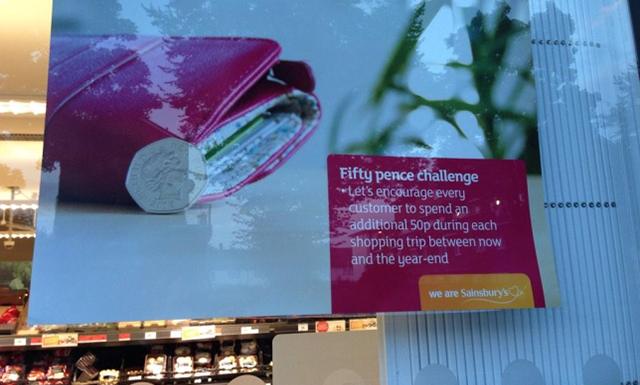 You mean supermarkets like Sainsbury’s don’t actually want us to save money? They want us to spend MORE? Wouldn’t have clocked that one the time we were kicked out of ASDA.

Clearly this poster was meant for Sainsbury’s staff’s eyes only — except it ended up at the front of Sainsbury’s in Stratford, east London.

.@sainsburys not sure this is supposed to be in your window… pic.twitter.com/Zk9GCliIWO

@sainsburys oh I’m not sure about that Ross… I kinda like that they’re giving folks a heads up!

@mynameischrisd Understood. I’d really appreciate you letting me know which store though. Ross.

@sainsburys how are staff supposed to encourage the extra 50p spend? #50pChallenge

He eventually let them in on the location, after which Sainsbury’s released this statement:

We often use posters to make store targets fun and achievable for our colleagues. They are intended for colleague areas in the store, but this one was mistakenly put on public display.

Always some drama going down at Sainsbury’s. Keep the meat aisle masturbators at bay and we might forgive you this one.