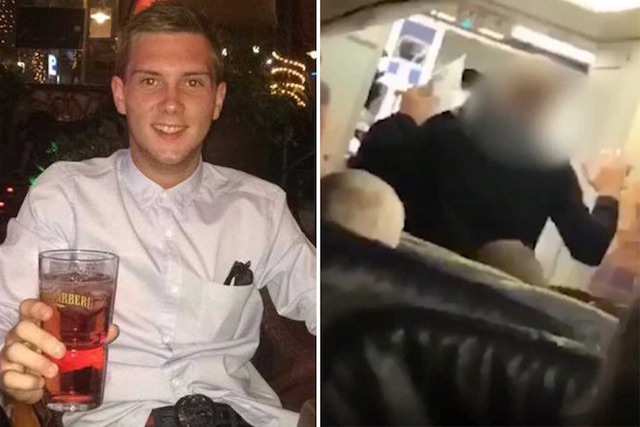 I feel like there are less and less posts about people being idiots when they’re asked to put mask on in confined spaces to try and halt the spread of the virus as we’re hopefully coming to the end of the pandemic now, but every now and again you’re still getting people like this dickhead coming back from his trip to Tenerife.

25 year old Daniel Hendry decided that it would be a good idea to drink three quarters of a bottle of vodka on his way back from his holiday on January 29th, and this ended up getting him into a whole load of trouble when cabin crew asked him to put his mask back on. Firstly, he mocked Italian air host Samuel Proietti’s nationality repeatedly and threw him a Mussolini style salute, before telling one of his female colleagues that he was going to punch her and smash her head in.

Hendry then proceeded to do just that and headbutt her, leading him to be detained for the rest of the flight:

Jesus. Why do people think it’s such a good idea to get so lairy and fight flight attendants? There’s literally no way that this could be a good idea whatsoever, but you see it all the time. People really are the dumbest some times.

Predictably, things didn’t work out too well for Hendry and he was arrested when the plane touched down in Manchester airport. He plead guilty to entering an aircraft when drunk, criminal damage and assault and was jailed for 14 months today. Good.

Prosecutor Neil Ronan goes into more detail about the flight:

He moved to the rear of the plane and asked cabin crew why he couldn’t drink his own vodka.

He confirmed he had drunk three quarters of it and became aggressive towards a female member of cabin crew* saying ‘f*ck off I am going to punch you, I am going to smash your head in’ while clenching his fist.

He then headbutted him, and the defendant’s head had contact with the right side of the victim’s face. No visible injury was caused.

Staff refused to be near him on arrival due to their fear of him.

One crew member told police the flight was the worst they had ever worked on and another was scared as they had never experienced anything like it.

Sounds like an absolute nightmare. Can people just stop doing shit like this on planes, especially at the moment when there’s a pandemic? Asking nicely.

For more of the same, check out this video of a policeman strangling a woman for not wearing a mask. Maybe not that good an approach either hey?