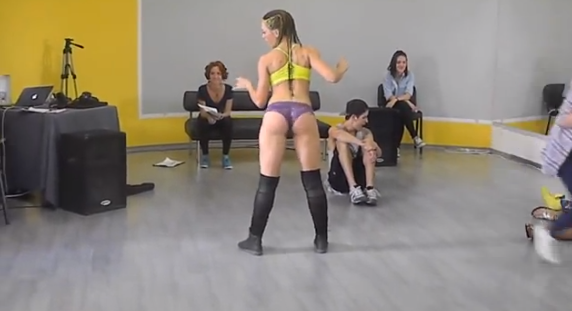 The dance style that you hope you never see your parents perform at a wedding has now hit Mother Russia, and Mother Russia looks good.

Miley Cyrus hit what has been come to known as the ‘ex-child star public sexual meltdown”, but where as Britney Spears did it by shaving her head Miley at least brought the ‘art’ of twerking to the public’s eye. Twerking, for those who may have been hiding under a rock, is essentially dancing like a stripper, a REALLY good stripper, but not getting paid for it. Essentially it’s just moving your ass around to music in a very convulsive manner, guys like it, and girls who like attention off guys have now embraced it.

Well, Russia likes to embrace everything the West does in one way or another, usually to more of an extreme, and now Russian street dancers are getting into the ‘twerk scene’.

First of all, is it a scene? Do gangs meet up and have twerk offs? (ha, that sounded rude) Apart from the time a date dragged me to see Step Up 4 3d (I drank bleach to wipe the memory of the film from my mind) I’ve never seen groups of punk ass kids having dance offs of any type, let alone dancing like strippers, but maybe I’m just getting old and not hanging out in the right places.

Anyway, here’s a Russian who will make you throw your hands up in the air and praise the lord of twerking. Also, watch the guy sat behind her who looks like someone in one of those awful dance movies, when he starts clapping a small part of my soul dies.