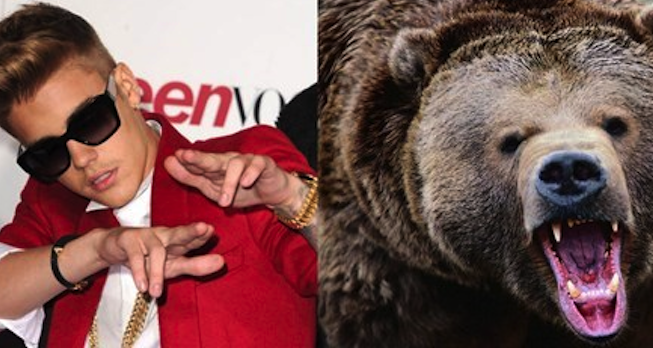 Finally a good use for a Justin Bieber song.

A Russian fisherman has claimed that he’s only alive thanks to Justin Bieber – and more specifically his first hit ‘Baby’. No, he isn’t some weird Belieber who’s claiming that Justin Bieber saved his life thanks to his inspirational beats and lyrics – in fact it’s entirely the opposite. The dude – a 42 year old Russian named Igor Vorozhbitsyn had parked his car and was heading out to his fishing spot for the day when a bear jumped him from behind and started mauling him on the floor, as is often the case with Russian bear – except for this one of course who is the most talented and human like bear anyone has ever seen.

In a clear state of panic, Igor didn’t really know what to do as the bear was on top of him mauling his face and chest. Fortunately though, the bear accidentally knocked his mobile phone and it started playing Justin Bieber’s ‘Baby’, which apparently caused the bear’s demeanour to change and he suddenly legged it back off into the forest. We can’t say that we blame him – even if you’re in the middle of murdering someone having to listen to that whilst you’re doing the deed is enough to put anyone off.

Following his lucky escape – Igor believed the bear would have killed him if the phone hadn’t gone off – Igor was keen to dispel the idea that he was a Belieber or even a vague Justin Bieber fan, stating the following:

I know that sort of ringtone isn’t to everyone’s taste but my granddaughter loaded it onto my phone for a joke.

All together now: ‘yeah right’.  Let’s be honest, if he had the Slipknot remix though, the bear probably would have dug it and stuck around and mauled him to death, so it’s probably a good thing for him that he’s a closet Justin Bieber fan. A bear expert has also come out and decided to spoil the fun, stating that it probably wasn’t the Justin Bieber track specifically that scared the bear off, but just the fact that the noise came out of nowhere. I think every Sick Chirpse reader knows the truth though.