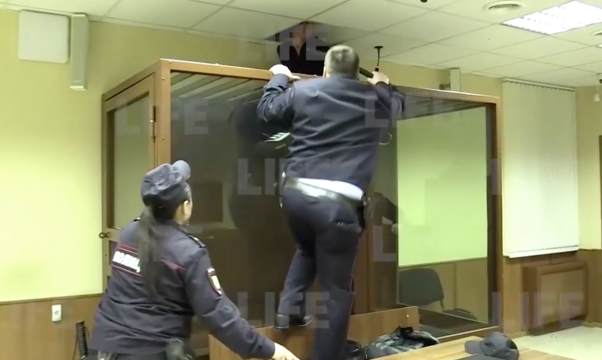 This 18-year-old killed his own sister during a satanic ritual.

An 18-year-old Russian kid named Muscovite Leonid Grayser who murdered his sister during a satanic ritual while trying to “banish her demons” tried to escape his own trial this week, while trapped in a cage and surrounded by police.

To be fair, he makes a pretty good go of it, but ultimately it was never really going to happen, was it?

Well I guess when you’re looking at 30 years to life in a Russian prison for murdering your sister, you might as well take your chances and make a dash for freedom any way you can. I like how the guards are all standing around watching him like they know he won’t get too far, but as soon as he starts literally climbing through the ceiling they panic and spring into action.

No doubt Grayser has a tough 30 or so years ahead of him – this is the prison he’s headed to. Grim:

No less than he deserves I guess. Older brothers are meant to protect their sisters, not kill them. Let’s see him try and hatch an escape plan from Russia’s most hellish prison.

To watch the son of a murdered woman try to attack his mum’s killer in court, click HERE.