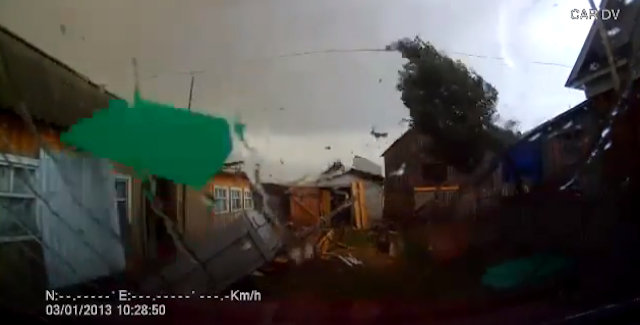 That’s some scary shit that you definitely do not want to be in the middle of.

This isn’t as crazy as the guy who uploaded a video of him running into a hurricane and taking a selfie, but it’s still pretty up there.

We all know Russian dash cams pick up some absolutely insane footage, but normally it’s of stuff going down on the roads, not when the cars are parked stationary. This footage is different though, because it occurred when a guy accidentally left his dash cam on whilst he had parked his car in his village and a hurricane decided to rip through it and totally destroy everything. Amazingly the car seemed to stay on the ground despite buildings on either side of it being uprooted, but I guess perhaps those buildings didn’t have strong enough foundations in the first place.

The footage was taken a year ago but only uploaded onto YouTube this week.