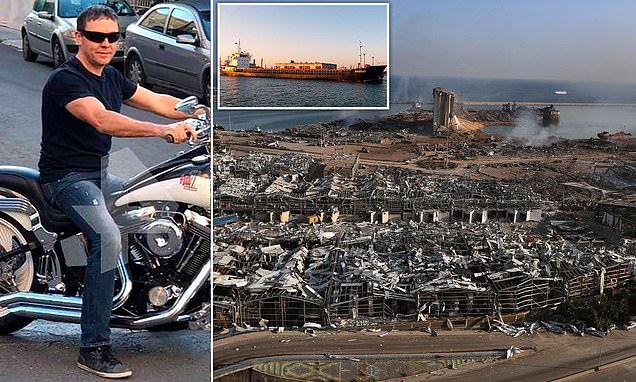 Lebanon has placed every official responsible for the security of Beirut’s port for the last seven years under house arrest.

Lebanon has placed every official responsible for the security of Beirut’s port over the last seven years under house arrest as it investigates the massive explosion which has devastated the city.

The country’s political figures have assured that those responsible for the tragedy would ‘pay the price’, but customs officials have pointed the finger back at them – claiming they were repeatedly warned of the danger but failed to act.

It comes as this photo emerged of the dock’s Warehouse 12 filled with ammonium nitrate – with the highly explosive chemical stored in simple construction sacks with no other protection in place:

BREAKING – This is an alleged photo of Hanger 12 at #Beruit Port that Lebanese officials say was housing 2,700 tons of ammonium nitrate that had previously been seized by the Port.#BeirutBlast pic.twitter.com/GaTyWav6ez

The lethal load is said to have been abandoned by Russian businessman Igor Grechushkin in September 2013 before eventually being transferred to the port where it remained for six years. Igor is reported to currently be residing in Limassol, Cyprus, with his wife.

According to MailOnline, Igor’s ship carrying the explosive materials was detained en route from Batumi, in the ex-Soviet republic Georgia, to Mozambique, and never recovered.

Storing Ammonium Nitrate in a civilian port is a crime against humanity that must not go unpunished.

At time of writing the Beirut death toll was at 135 with some 5,000 wounded and dozens still missing. The port of Beirut has also been left looking like it was hit by a damn meteor:

Before and after satellite images show devastation of Beirut explosion https://t.co/Qhkou6A3j3 pic.twitter.com/k3jkypayoQ

All that death, chaos and destruction not because of an act of war or natural disaster, but because 7 years ago some dodgy Russian businessman was transporting 2,750 tons of a highly dangerous chemical, had it confiscated, declared bankruptcy and fucked off:

First pictures emerge of a Russian man whose ammonium nitrate cargo detonated in the port of Beirut. The 2,750 tonnes cargo of Khabarovsk-born businessman Igor Grechushkin was detained in Lebanon in 2013 https://t.co/hbu1VJgres pic.twitter.com/yQZqzcBIya

Unfortunately the thousands of tons of explosives this guy abandoned were left in the hands of officials who would have been smart enough to realise how dangerous the stuff was, but too incompetent/lazy to safely get rid of it or even put it to good use. And now because of that hundreds of people are dead, thousands are injured, and Beirut is a disaster zone.

The devastation caused by the blast is enough to have people wondering whether Beirut will ever recover. Apparently the economy was already tanking and unemployment was already a huge problem. But there are still scenes coming out of the city that are offering people some hope:

A grandmother played “Auld Lang Syne” on a piano in her home surrounded by debris and devastation following the explosion in Beirut, Lebanon.

Her granddaughter said the woman was “pushing through her pain” in a moment she described as “beauty from ashes.” https://t.co/voGycIFENh pic.twitter.com/9d7rGFQyIT

The resilience of the Lebanese people is inspiring. Look at this. Volunteers in the street of #Beirut clearing the rubble. @akhbar pic.twitter.com/9zNggHJDaW

For the victims and their families and the volunteer workers helping out, let’s hope Beirut can recover from this and the pieces of shit responsible face some sort of justice. They had SEVEN YEARS to do something about this and because of their inaction an entire city has been destroyed and thousands of lives are in tatters. Unfuckingreal.

For more footage of the destruction caused in Beirut, click HERE.