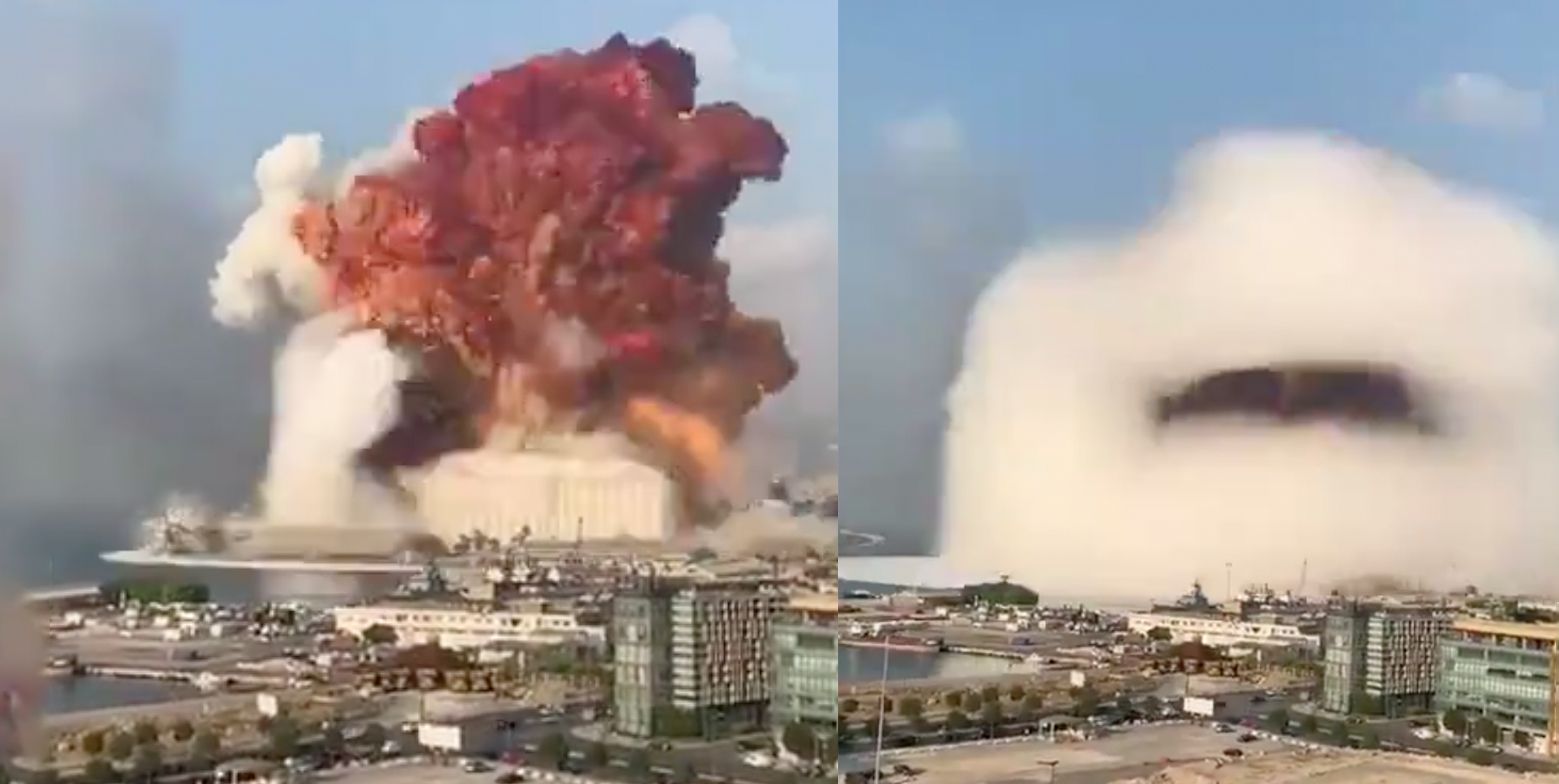 There’s no denying that the explosion in Beirut yesterday was like nothing we’ve ever seen before – only Hiroshima or 9/11 even come close I think – as it’s being estimated that its effect were felt over 150 miles away from the epicentre.

Many speculated at the time that it may have been a nuclear blast, but it’s now being blamed on a shipment of ammonia nitrate that had been left untended in the docks of Beirut for the last six years after it was confiscated from a Moldovan ship and nobody knew what to do with it, so just left it there. Here’s the tweet that seems to prove this:

In Sep 2013 ship flying a flag of convenience was abandoned by its owners in the port of Beirut. Crew members remaining on board were left w/o provisions & had to be taken off the ship through legal intervention. The ship’s 2700 tonnes of ammonium nitrate is today’s explosive. https://t.co/lqJh8ElIaZ

Then yesterday, a man was welding shut a door at a fireworks factory where he set some of the rockets off which subsequently started a fire that spread to the ammonia nitrate, apparently causing the blast – although I’m sure there are already countless conspiracy theories out there. If this is indeed the story then it’s a completely tragic and negligent set of circumstances and coincidences that have led to one of the biggest disasters in world history. Our thoughts are with those affected in Lebanon and we hope that the country can get back on its feet, although that is probably going to be a lot easier said than done.

I imagine most of us have seen at least one video of the blast, but when you scroll through Twitter there is so much footage of it and every single video gives a different perspective to the others on the sheer scale, power and destructive impact that it had. Can’t actually believe that some of the people filming were still alive and able to upload their videos considering how close they were.

Just wanna use this opportunity to use this account to spread awareness of what’s happening to the world.

The Governor of Beirut compared today’s explosion to the Hiroshima and Nagasaki atomic bombs. pic.twitter.com/Zn7g5CScZt

#Beirut explosion | A terrifying view from a motorist pic.twitter.com/5kRS0lovED

The video of the #Beirut port explosion that has hit me the hardest. A first hand perspective of what it felt like that has been circulating on WhatsApp. pic.twitter.com/8PvZivqGXR

Another angle of the gigantic explosion in Beirut, this video was taken a few meters from the explosion. The death toll is 73 dead and 3,500 injured. pic.twitter.com/6y2bPWPk2a

This is a video that I received from another angle – the person who shot it is OK.

Remember; many people usually jog/walk on the Beirut waterfront (close to the explosion).

Many people thought they just were documenting a big fire in the sea port. #Lebanon #beirutblast pic.twitter.com/CpuUgKAvLV

There is a closer video to the #BeirutExplosion in #Beirut (#Lebanon) you can clearly see the sparks from the fireworks and then the huge explosion. The guy who was recording is safe. pic.twitter.com/CSZ6W5kpOX

Did a rough sync of eyewitness footage from Beirut. Illustrates the time delay on how the blast wave hits relative to distance to the explosion. pic.twitter.com/onn8UV7kL2

#beirutexplosion has destroyed the area and taken many lives. pic.twitter.com/8mpCmw4Sgv

Fucking hell. Really can’t get over how absolutely all engulfing that blast is – kinda surprised that there hasn’t been more death and destruction to be honest, although what has happened and been recorded is completely awful. Just seems like it would be even more monumental from some of those videos.

RIP to those who have died as a result of this terrible accident and again, our thoughts and prayers are with anyone affected.

For more of the same, check out this supercut of the biggest explosions ever. Not sure how they rank now after that one.