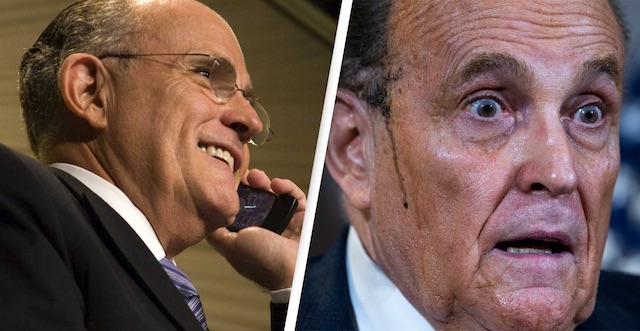 You might have thought that Rudy Giuliani would have tired of everyone calling him an idiot over the past couple of months during his time as the figurehead of Trump’s ridiculous campaign to overturn the election result, but it turns out that he’s still bumbling around and making a bigger fool of himself than ever before. What a hero!

This time he’s been found calling up lawmakers in the run up to the Georgia election on January 5th and asking them to slow down the election count. Giuliani thought that he was calling Alabama Senator Tommy Tuberville, but it turned out that he had called a different lawmaker and left the message on his voicemail and it’s now subsequently been leaked:

Rudy Giuliani thought he was leaving a voicemail for Tommy Tuberville about stalling the proceedings when Congress reconvened after the insurrection.

He left the voicemail on someone else’s phone… pic.twitter.com/qmTyK68XwP

I want to discuss with you how they’re trying to rush this hearing and how we need you, our Republican friends, to try to just slow it down so we can get these legislatures to get more information to you.

And I know they’re reconvening at 8 tonight, but it… the only strategy we can follow is to object to numerous states and raise issues so that we get ourselves into tomorrow — ideally until the end of tomorrow.

I know McConnell is doing everything he can to rush it, which is kind of a kick in the head because it’s one thing to oppose us, it’s another thing not to give us a fair opportunity to contest it.

Jesus, how stupid does Giuliani want to be? I can’t actually believe that he even leaves voicemails or discusses stuff like this on phone lines that aren’t encrypted or something to prevent leaks like this even happening – let alone a couple of days after his buddy Trump had a leak of literally exactly the same kind of conversation – but I suppose it shouldn’t be that surprising given his complete and utter incompetence in the last couple of months.

Anyway, seems like most of them will have bigger problems to deal with then this after the assault on Capitol Hill in Trump’s name yesterday. Or was it an ANTIFA conspiracy?