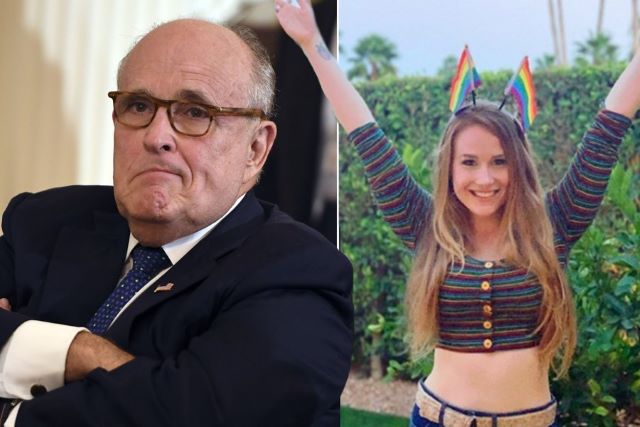 She says she loves being the “unicorn” in threesomes.

There’s not too many people out there who have had a worse few months than Rudy Giuliani. First, he was made to look like a massive creep on Borat 2. Then he failed to stop his #1 client Donald Trump get impeached while also watching him lose the Presidency. He also bizarrely held a press conference in the car park of a Four Seasons Landscaping because he thought it was the Four Seasons Hotel, and went on national TV with hair dye running down the side of his face to boot.

Just when you thought things couldn’t get any worse for the former NYC mayor, his daughter Caroline Rose Giuliani has written an article for Vanity Fair titled “A Unicorn’s Tale: Three-Way Sex With Couples Has Made Me A Better Person“, in which she casually and graphically explains the joys of group sex.

Here’s a summary from Page Six:

The piece, which opens with the words, “I want to watch my boyfriend bend you over,”    Caroline — the 32-year-old daughter of Rudy Giuliani with Donna Hanover — writes, “I had known some time I was at least bisexual but had barely explored that side of my sexuality. I knew I wanted to experience new dynamics.”

After signing up for a dating site for “Unicorns” — women who agree to have sex with couples — Caroline writes, “One woman I chatted with mentioned she was looking for someone to dominate her but be submissive to her boyfriend.

“I am typically more sexually submissive, but as we were texting (which quickly turned into sexting), I tried on this authoritative sexual persona.

“I was pleased to discover that, having been submissive myself, finding the language to turn Isabella on came naturally to me.”

After meeting the couple in a bar she describes in detailed literature, “We went back to their place. At one point Oliver and I had sex while Isabella watched – actively. She was a ‘cuckqueen’ which is a woman who enjoys role-playing ‘humiliation’ this way.

“Many aspects of the encounter were pleasurable and fun, but the most engrossing sensation was feeling Oliver’s palpable love for Isabella…..his desire to fulfill her was the deeper motivation for filling me.”

Caroline concludes that after the experience she identifies as “pansexual”, and admitting she has battled anxiety and depression her entire life, she writes, “The incredible moments of connection and transformation I’ve shared with these couples reminds me that my expansive mind is a gift.”

In fact, I wonder what Mr. Giuliani has to say about all this? Unsurprisingly…

Who knows, maybe he’s as pleased as the rest of us that his daughter found a way to banish her anxiety and depression by joining other couples for threesomes. Who knew that being a ‘cuckqueen’ could have such a positive impact on someone’s mental health? Sounds like a win-win-win situation for everyone involved.

Seems Caroline’s sexual open-mindedness has brought happiness and joy to not only herself, but also to the couples she romps with. Although probably not to her dad. Oh well, can’t please everybody.

To meet the polyamorous man who wants to get both his wives ‘pregnant at the same time’, click HERE. That’s going to be a lot of work.