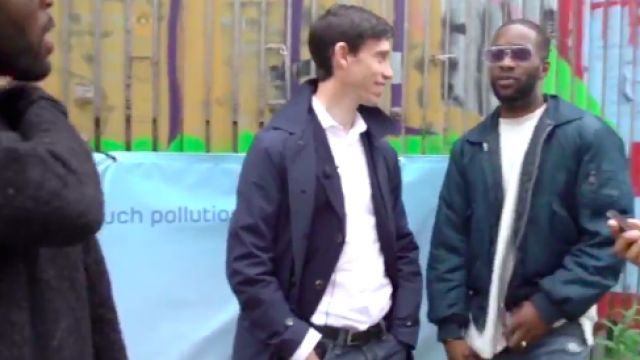 Rory Stewart is an outside candidate for winning the race to become leader of the Tories and therefore Prime Minister and to try and drum up support for his campaign he’s been travelling around the country and meeting people, posting the results online.

Not really sure how this tactic is going to help him in the leadership race as I doubt it’s going to appeal to any of the Tories that are actually voting in it, but it does mean that we get to see incredibly awkward videos like the one below and I’m all for that. In the video, Stewart is out and about in East London when he runs into three dudes on Brick Lane and tries to engage them and the results are kinda weird:

Lol. What was all that about hey? Seems like those three guys were all high AF – confirmed by them saying that they were heading to Nando’s which is perhaps the most stereotypical black stoned thing that they could have said – and just wanted to fart around on camera instead of engaging with Stewart. Not really sure why he thought that this would be funny or rewarding to post on his Twitter account, but I suppose we’re writing about it so it’s got him some publicity. Not sure if this is the kind of publicity the guy is gonna want though to be honest.

For more of the same, check out Rory Stewart admitting that he once smoked heroin. The guy’s got all angle covered.