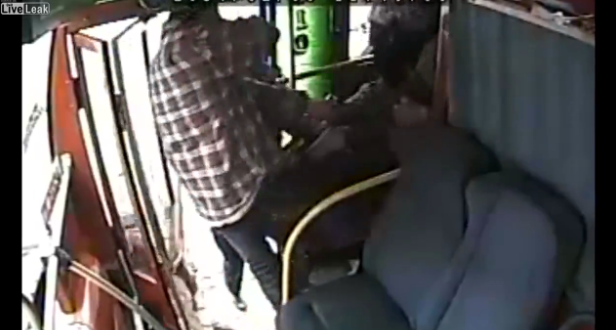 If you get queasy easily then it’s probably best not to watch this video.

Whatever way you watch this it’s really fucking messed up. All I’ve got to go on for background on this is a really really badly Google translated blurb on LiveLeak but I think this is the gist of it.

The father and son – AmaguaÃ±a Changoluisa Joseph Sanchez and Franklin Fernando Changoluisa Chilig were sitting down on the bus in Ecuador with a briefcase that had $20,000 in it on February 5th 2012. Not really sure what they were doing transporting that around, but it’s South America so probably best not to ask any questions.  Apparently the robbery occurred pretty nearby a local financial institution though, so it’s safe to say they were transporting it there. Where they got it from and why they were doing this is another matter though.

Unfortunately, they never made it to the bank as they were attacked by robbers on the bus, one of which brutally shot Amaguana in the back right there in front of everyone on the bus. His son is then dragged off the bus holding onto the briefcase and it looks like they may have shot him on the floor there, although you can’t really tell from the video.

Either way it’s completely brutal and disgusting. You’ll be glad to know that the robbers/murderers have been caught now and are currently in a maximum security prison over there. There’s also been a significant dismantling of the criminal organisation that they’re a part of. Scumbags.