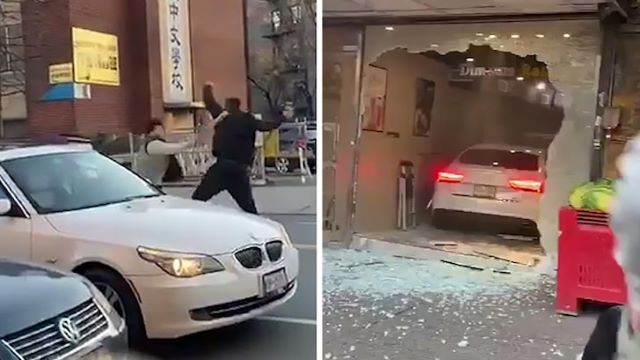 It’s amazing no one died in the making of this video.

A fight over a parking spot quickly escalated into a full-on brawl in Flushing, NYC the other day (it looks like China but trust me it’s NYC), that ended with a car smashing into a bakery that was celebrating its grand opening.

As the Tweeter says, it’s lucky nobody was killed…

Pretty lucky no one died during this insane road rage battle in Flushing yesterday, apparently sparked by a parking space dispute https://t.co/6RqGG3lbaS pic.twitter.com/SQZMQStP5l

According to TMZ, 3 women and a man – including a bakery employee – were hospitalised with non-life threatening injuries. The man behind the wheel, Jie Zou, was arrested for assault and reckless endangerment. Jonathan Zhang, the passenger in the Audi, was also arrested for assault.

Having watched the clip a number of times, I still cannot believe no one was more seriously hurt, especially once the car mounted the pavement and crashed into the bakery like a Ryan Reynolds action movie or something. The lady standing against the wall inside the bakery either has the world’s quickest reflexes or the best luck ever.

Also, 00:15 – 00:18, my word that guy takes baseball bat hits like a champ. Shout out the little old grandma that stopped to yell at them for a second too. It was already too late by that point though – their heads had completely gone.

It’s not even the most insane thing you’ll witness in NYC, considering what goes down on the subway over there. What a shit hole!