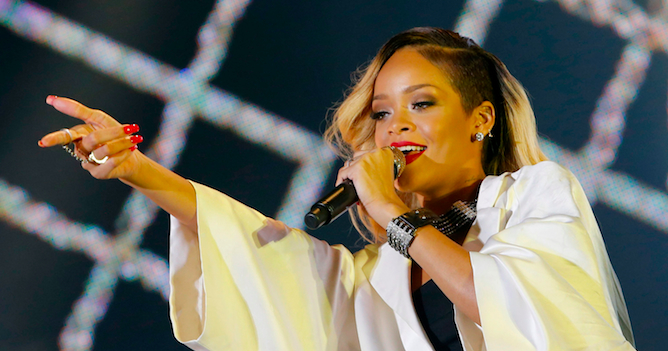 Don’t mess with the good girl gone bad, otherwise you’ll get a microphone in the face.

Rihanna is another Sick Chirpse favourite – mainly because she’s a good girl gone bad and a massive stoner and just a general badass – and this video just makes us like her even more to be honest. Basically Rhi Rhi had been partying pretty hard with her bff supermodel Cara Delevingne in London until 3:15am (daring, although to be fair it was a Monday night) even though she had to be on stage in Birmingham at 8:30pm the day after and apparently turned up two hours late to the show. Grrrlfrnd!!!

This didn’t dampen the enthusiasm of the crowd in Birmingham though as it was probably the best thing that had happened to them all decade. Trust me I know, I used to live there. They were all going absolutely batshit crazy all throughout the concert, especially when Rihanna headed down to the front to do that bit all singers do where they get really close to the crowd so they can ‘connect’ with the fans even though it pretty obviously disgusts them to go anywhere near them.

And I don’t think Rihanna could have demonstrated this any better in this video. She’s walking along singing and everyone is trying to grab her and touch her so that they can connect with her and/or tell all their friends that they touched Rihanna and there was a ‘definite connection, she looked at me you know’ when one fan grabs onto her for a bit too long and won’t let go. Rihanna is notably pissed off and when she won’t release her grip she turns around and whacks her in the face with the microphone, pretty much without even missing a beat. That’s my girl.

People will probably say that Rihanna should treat her fans a bit better and not whack them in the face with a microphone, but I kinda think it would be pretty annoying to have all these people grabbing me whilst I was trying to sing and dance for them. The price of fame sure, but I think as well you have to remember that there’s probably 10,000 other people in the arena and this one fan is definitely getting way more than everyone else, and kinda ruin everyone else’s enjoyment – especially the people further down the crowd then them – so maybe Rihanna is actually thinking of all the other fans with her actions?

Yeah, probably not, she was probably just mad at these crazy fans, but it’s still a pretty awesome video. Check it out below: