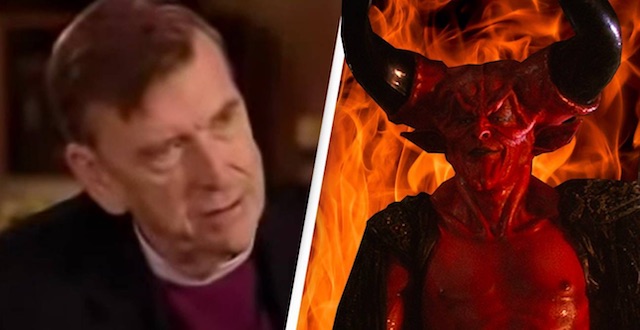 I’m not sure what everyone reading this will think of religion – I’m sure some of you probably actually still go to church and many more of you probably won’t – but I think that some of us can probably agree that most forms of organised religion were initially conceived as a method of controlling the masses, and that’s why it makes it even funnier that a retired priest is now admitting that the concept of hell was invented by the church to control people.

US priest Bishop John Shelby Spong recently decided to say the following about his thoughts regarding life after death and the concepts of heaven and hell in this equation:

So they create this fiery place which has quite literally scared the hell out of a lot of people.

Yes, I think the church fired its furnace hotter than anybody else.

The church doesn’t like for people to grow up because you can’t control grown-ups. That’s why we talk about being born again, when you’re born again you’re still a child.

People don’t need to be born again they need to grow up. They need to accept their responsibility for themselves and the world,

Every church claims we are the true church and we have some ultimate authority.

God is not a Christian or a Jew or a Hindu or a Buddhist. All of those are human systems that human beings have created.

Wow. Not sure what’s got into Spong now that he’s retired – maybe he’s living the wild life and boshing drugs and shagging hookers every weekend? – but I doubt that the church is going to be too happy that he’s spouting opinions like those, even if they are major truth bombs.

To be fair, I doubt anyone overly religious is going to pay any attention to what he’s saying there, but the fact that he’s come out and said it is surely going to turn a few heads, especially after the recent Lil Nas X debacle. Good timing bro. Just hope these opinions get vocalised more so even more people can hear them and be converted by them.

For more of the same, check out this priest who convinced his congregation to drink bleach. Some really strange ones out there.