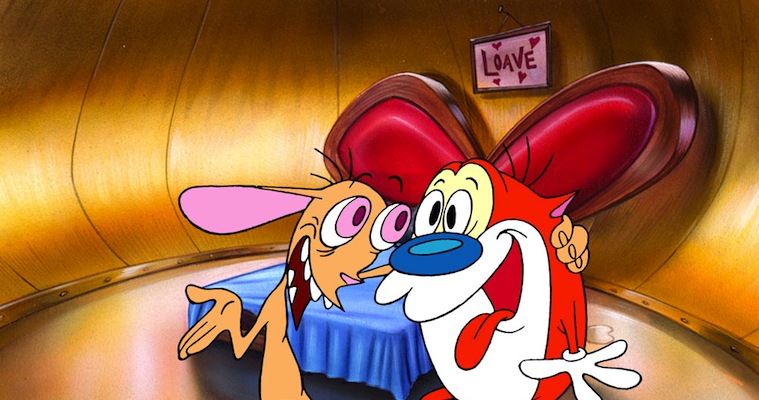 Lots of cool stuff happened in the 90s: grunge, Jurassic Park, drum n’ bass, PlayStation, etc. But one of the coolest cultural landmarks in that hallowed decade was a brilliant, wildly inventive and deeply disturbing cartoon shown on prime-time television, blowing the fragile young minds of children everywhere; The Ren And Stimpy Show.

First screened on Nickelodeon (and on BBC2 for those of us who didn’t have cable or satellite), The Ren And Stimpy Show was the brainchild of warped genius and illustrator John Kricfalusi. Each week, sickly, misanthropic chihuaha Ren Hoek and his cohort, the loveable, moronic cat Stimpy would get into one absurd adventure after another. The tone of the show veered from the slapstick and surreal to the downright twisted.

What made Ren And Stimpy so brilliant was that despite its timeslot and intended audience, the show well and truly gave no fucks. It worked within the parameters of what the network would allow but had no qualms about pushing the envelope as far as it could possibly go. My all-time favourite moment from the entire series is in the episode ‘Stimpy’s Fan Club’, where Ren has a nervous breakdown after reading Stimpy’s fanmail and considers murdering his feline cohort in a jealous rage while he’s asleep.

It’s a perfect mix of imagery, sound, atmosphere and pacing, both deeply upsetting and laugh-out-loud hilarious. If someone tried to make this on kids TV today they’d be slapped with a lawsuit, hundreds of people would resign and The Daily Mail would blame the whole thing on immigrants, free-thinkers, feminists and the NHS.

South Park may have been sharper and Beavis And Butthead may have been gleefully dumber, but these shows were standing on the shoulders of a veritable giant. Indeed, the left-field animation that we enjoy today (Adult Swim and so on) owes an immeasurable debt to Ren and Stimpy. Even Spongebob Squarepants borrows stylistic elements wholesale from it, and rightly so. Think about it: if you had kids, would you want them to watch insipid, saccharine tripe that treats them like morons? Or would you rather they watch something sick and colourful and teeming with expression? If you picked the latter then congratulations, you’re allowed to breed.

Of course, there’s no great trick to being disturbing for the sake of it. What made Ren And Stimpy truly special was how expressive, stylised and brilliantly animated it was. The creative minds behind it were razor sharp and used countless archive sound and music clips as aural punctuation marks. The show was ultra-aware, both of itself and kid’s TV in general, as evidenced by the commercial that played in between episodes for that most beloved of children’s toys, Log:

Netflix currently has three seasons up but the first, made before Kricfalusi was sacked over creative differences with the network, is the best. Sadly, there’s no sign yet of one of my favourite episodes, the ludicrously violent ‘Mad Dog Hoek’, in which the hapless duo become professional wrestlers. One can only assume the powers that be at Netflix were worried some impressionable youngster would be daft enough to copy the moves and end up crippling themselves (at one point, Ren is forcibly held down while a car is driven over his face). Luckily, we have YouTube to save us in our hour of need. Here’s that amazing episode in its entirety:

Kricfalusi tried to resurrect the show in 2003 with ‘The Ren And Stimpy Adult Party Cartoon’, shown after watershed on the cable-only Spike TV in America. The late-night slot meant that the show was free to indulge its darkest whims with some adults-only material. It could have been a vital, spectacular return but something had changed. Even at its most bizarre and hallucinogenic, the show used to possess a sort of weird innocence, which disappeared entirely when it returned in 2003. It speaks volumes that the original voice of Stimpy, Billy West (currently gracing our screens in Futurama) was so appalled at the tone of the new version that he wanted nothing to do with it. After three episodes aired, the whole thing was killed off.

The show ran out of creative steam by the end but at its peak it was untouchable. Its influence can’t be overstated and it’s as ridiculous and essential as ever. Go on YouTube right now and remind yourself/discover why. Do it, you EEDIOT!