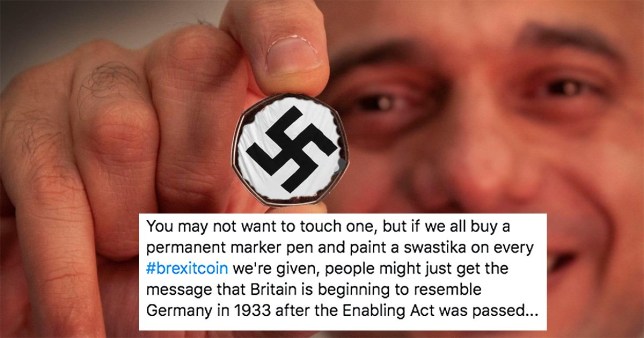 Brexit is well and truly on its way, with the final preparations leading up to the historic day on Friday well and truly in place, including the new 50p coin that was unveiled by Sajid Javid last week.

Obviously Remainers weren’t very happy with the coin saying ‘Peace Prosperity And Friendship To All Nations’, given that it’s being commissioned to commemorate an act which arguably demonstrates the exact opposite of that, but I really think one guy named Neil Marshall took this to the absolute limit with the below tweet (screenshot because he’s now deleted his account): 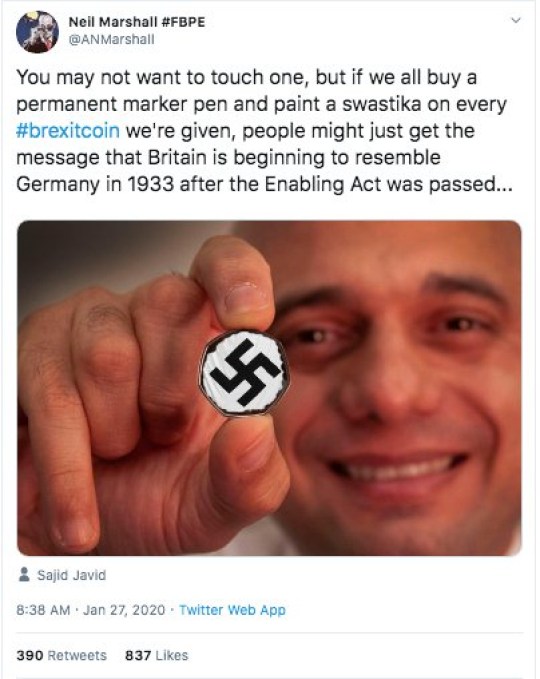 Geez. I mean there might be some kind of argument that could compare the current situation in the UK to that of Nazi Germany in 1933, but I don’t think that vandalising coins by drawing a banned and universally hated symbol of genocide is going to raise awareness or change anyone’s mind about it.

In fact, it’s just going to make everyone on both sides of the debate think that you’re a dickhead, causing you to delete your account., espcellialy when you decided to make the tweet on Holocaust Remembrance Day. Moron.

Here’s a few of the best replies that probably say it better than I ever could:

I don’t understand the thought process as to how you thought this makes sense or is acceptable to tweet.

Completely irrational as a gesture, obliterating a message that says peace, prosperity and friendship to all nations with a symbol identified with hatred. Completely insensitive to do so on Holocaust day.

I am, or was, also a remainer. I am also not a Conservative. But I am not on your “side” because I am on the side of humanity.

How insulting you are to the thousands of holocaust victims we remember today. You are truly an appalling individual. Truly appalling.

Equating Brexit with the Holocaust is probably one of the worst things I’ve seen on here..and I’ve read some vile stuff…you are a vile insensitive individual (btw you need to look up the meaning of democracy too)

Disgusting individual. Do not promote the symbol that introduced a reign of tyranny over my ancestors.

Yeah, seems pretty clear that this was a dumb thing for Marshall to do. Apparently the Met Police are now investigating his actions and he could face up to six months in prison for defacing a coin and promoting hate speech. Whoops.

For more of the same, check out the guy who yelled ‘Stop Brexit’ for 847 days finally admitting defeat. Loser.