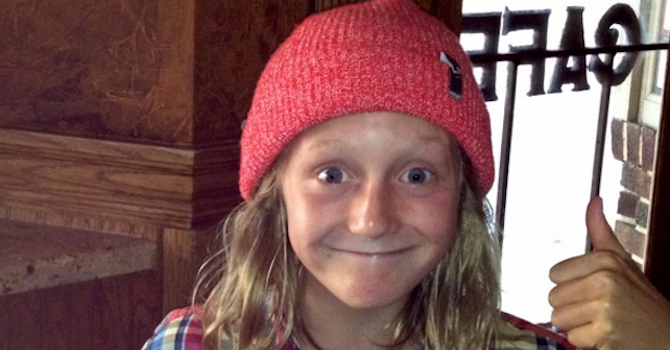 I don’t know a lot about snowboarding but I’m pretty sure that this 12 year old kid called Red Gerard is one of the sickest snowboarders ever.

I don’t really know much about snowboarding at all. I think most of my knowledge would probably come from 1080 snowboarding back on the N64 but I only ever played that at a mate’s house so even that doesn’t really mean anything. I tried to go snowboarding a couple of times at the Snowdome in Tamworth but was just really crap at it because of my flat feet so that was that. Also, one of my best friends broke his back snowboarding and now has a bunch of metal bolts in his spine for the rest of his life, so I wasn’t really too keen to get back into it after that.

With that in mind I might be dangerously under qualified to write this article, but from what I can see in this video, it looks like young Redmond Gerard is shaping up to be a complete killer when it comes to snowboarding – if he isn’t already a complete killer that is.

Every trick in this video looks completely dope and it only gets better at the very end where Red takes of his visor and you see that it’s a 12 year old kid (who actually looks more like a 9 year old kid) who has been busting out these moves and smashing it rather than the adult professional snowboarder that you expect it to be. OK, maybe his height was a bit of a giveaway but you can’t really tell that well how tall he is in the video. And Red himself just looks so young anyway it makes it all the more impressive.

If you wanna know anything about Red and how he’s so good at snowboarding then here goes. It’s probably because he first started when he was aged two – he also loved dirt biking and regular biking from an early age which probably helped him with his balance in his early years as he grew up in Cleveland so couldn’t snowboard as much as he would like. This all changed though when the family moved to Brekenridge and later Frisco in the Colorado mountains and Red started snowboarding all the time when he was around seven.

He then entered a competition and made it all the way to the national finals, only to lose on some bullshit call when his helmet fell off which meant he was disqualified. Since then, he’s found sponsorship with Burton and a bunch of other well known snowboarding brands and has been tearing up the runs and making sick videos like the one below pretty much all the time. Killer.

You can check out some more of Red’s tricks and find out more about him over at his official website at www.seeredshred.com, but in the meantime check out this badass video of him below. It’s only a matter of time before he spearheads the 1080 Snowboarding relaunch on whatever console Nintendo has now.

The Creepiest Things Young Kids Say To Their Parents