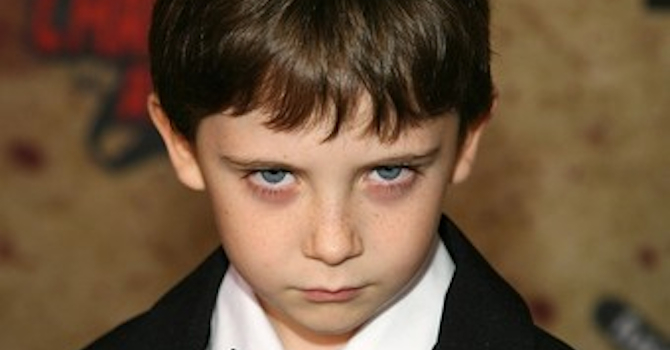 Over at Reddit one user asked others to share stories of the creepiest things their kids had ever said to them. It got 11000 replies. Here are some of the best we’ve collected for you.

The other day over at Reddit one of those cool Redditors asked the internet what the creepiest things were that young children had said to their parents. Reddit posts can go one way or the other, and the response to this one was phenomenal with over 11,000 replies. Wow. Here are some of the best ones (and they really are great) but if you’ve got a bit of spare time then maybe head over HERE and check out all the others. Some of these are so funny and weird. Kids are nuts.

Unfortunatebirthmark: I was tucking in my two-year-old. He said “Good bye dad.” I said, “No, we say good night.” He said “I know. But this time it’s good bye.” Had to check on him a few times to make sure he was still there.

NotTomPettysGirl: Not to me, but to his grandmother. He was cuddling with her and being very sweet (he was about 3 at the time). He takes her face in his hands, and brings his face close to hers, then tells her that she’s very old, and will die soon. Then he makes a point of looking at the clock.

GatorMcGovern: A friend of mine’s child told him “Daddy, I love you so much that I want to cut your head off and carry it around so I can see your face whenever I want.”

evillawnornament: “Daddy sleep” then pushing my head underwater at the pool.

Thingsimeantobe: My five-year-old at the time had night terrors and would scream in her sleep. One night I said ‘mama’s here it’s okay’. She looked right at me still asleep and screamed ‘mama? But who is that behind you?

jelb32: My five-year-old son asked me last week “what do you see through the black circles in my eyes when you’re controlling me when I’m at school?”

Like_I_was_sayin: My three-year-old daughter stood next to her new born brother and looked at him for awhile then turned and looked at me and said, “Daddy it’s a monster. We should bury it.”

abluesxs: I jokingly asked: “What’s the best way to get a girlfriend?” 7-year-old’s response: “Tell her to be my girlfriend or she’ll never see her parents again.”

psalm_69: I was sound asleep, and at around 6am I was woken up by my 4-year-old daughter’s face inches from mine. She looked right into my eyes and whispered, “I want to peel all your skin off”.

olafthebent: “So I shouldn’t throw him in the fire?” 3-year-old daughter holding her baby brother for the first time.

Lord_Of_Hosts: “My 3-year-old son generally has a happy-go-lucky attitude, so this is pretty odd. Sometimes when he’s cuddling with his mommy, he’ll say, very seriously, “Mom, I promise I won’t ever chew on your bones. I promise.” Absolutely no idea where he got this.”

I-Am-Not-Jesus: “My daughter told me she wanted to live with me and my wife forever. She’s 17”

Kid: I want a cupcake, please?

Kid: Whispers If you give me a cupcake I wont cut your neck”

Nilliak: “While not something my own child has said, my younger cousin (around 5 at the time) once drew a picture of a a black monster, looked up at me, and said “He told me to draw this. He’s coming for you. You better hide.”

hasnfefr: “My son (about 6) asked my mother to lay down on her stomach, then he sat on her butt and started bouncing up and down and proclaimed, “Now we’re mating like reptiles!” Thanks Discovery Channel!”