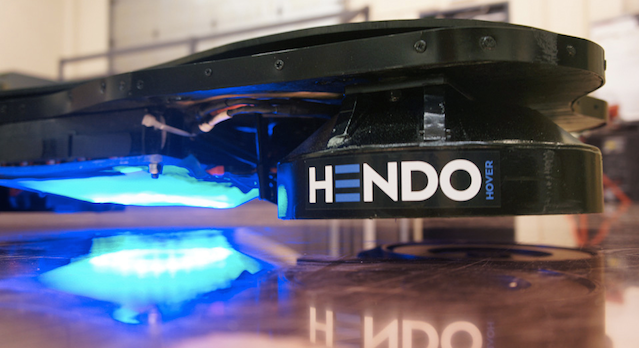 Remember last year when that awesome video about hover boards was released and everybody got really excited only it turned out to be a fake? Yeah, us too and yeah, it completely sucked.

Apparently though a real live working hover board actually exists and might very soon be available to buy, although that is if these guys get their Kickstarter campaign off the ground (at the moment they’ve raised around $21,000 out of their $250,000 total but there is still a lot of time left.

The Hendo Board as it has imaginatively been called (its creators are a couple of dorks called Jill and Greg Henderson – see where they got the name from huh?) is powered by 4 different hover engines that emit a magnetic field below the board which allows it to hover. Unfortunately it can only hover on a special kind of surface so you won’t be speeding around the city on it anytime soon, the Hendersons are constructing a special skate park to use it in as part of their Kickstarter project though, and hey it’s still better than all those fake ones out there right?

Although it’s still in the very early stages of development and it’ll probably be a while before you can get your hands on one the Hendersons reckon they’ll be selling them for $10,000. You might as well go and buy one of these water powered hover boards for half of the price as they look way more fun anyway.