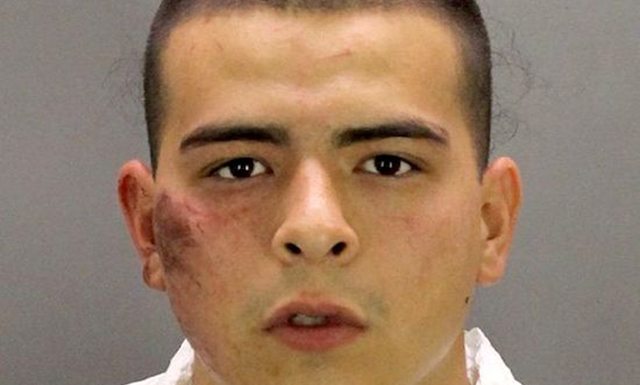 Absolute all out chaos on the roads of California – check out this footage.

A bank robbery and hostage situation in California sparked off a massive police chase and crazy gun battle in what looked and sounded like a GTA V 5-star style police showdown.

After robbing the bank, the three men took three hostages and had one of them drive their getaway car, meaning surrounding police were reluctant to fire at the vehicle.

As police followed the SUV around the streets of California though, the three men fired semiautomatic AK-47s from the windows and hit 14 of the 50 police cars (!) chasing them.

Two of the hostages escaped (or were thrown from) the vehicle, and the other was killed when the robbers used her as a human shield.

Two of the suspects were also killed (shot by police) and the one survivor (featured image above) has been arrested on kidnapping and robbery charges.

These guys are absolute pieces of shit but thankfully they got what they deserved this time – you want to play GTA V in real life don’t be surprised when you get the GTA V police treatment.

Here’s the footage — all out chaos: