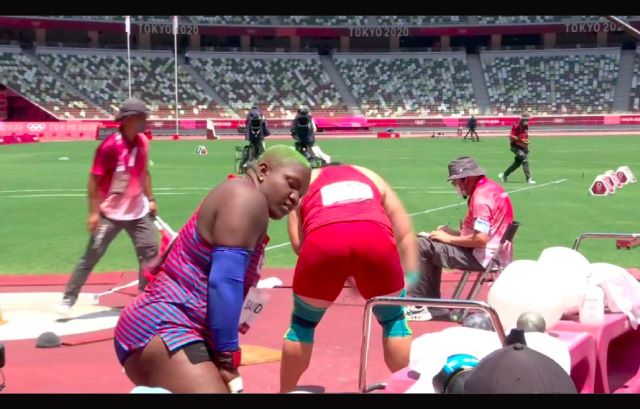 The US’s Raven Saunders has clinched second place in the women’s shot put tournament at the 2021 Tokyo Olympic Games, but her celebration seems to have rubbed a few people up the wrong way.

Other viewers accused broadcaster NBC of switching cameras straight away after loud and proud lesbian Saunders began twerking for them:

US shot-putter Raven Saunders twerks in front of the camera at the Tokyo Olympics. pic.twitter.com/3m6tU2PQhh

Looks like she’s having a bit of fun after one of the biggest accomplishments of her life. A little inapppropriate maybe, but is it really a big deal? Well according to some, twerking has absolutely no place at a prestigious, historic event like the Olympics…

The Olympics have become a joke. What a shame for those athletes that have worked so hard to get there and want to represent their country but have it under minded by athletes like this.

That’s the issue,we are encouraging promotion of this kind of sexuality on an open stage and no one finds this abit off,this is already being promoted to our kids.But it’s this perverse motion combined with the other protest of it(insert pronoun) that rubs people the wrong way.

As grotesque as it is, it’s truly representative of the United States right now. Certainly, the cities. For a long time, there was a strong push to lift up the underclass…that ended. Those who were on that better level gave up and fell to the lowest common denominator.

I’ll be honest, If she was attractive I wouldn’t mind as much.

Others were more supportive…

Just having fun. Unless there’s more to it than this clip a lot of commentators need to chill.

Well she got America a silver. Nothing wrong in having some fun and laughs.

Good for her! That booty is what is helping Team USA. The gluteals help big time with shot putt so yeah. Again, unless you’re a shot putter or an Olympic athlete, stop judging.

What I want to know is what the host country thinks about all this, given you’re supposed to respect and follow the customs of the country each Olympics is held in. However with TV ratings for the Olympics struggling at the moment, you’d think the broadcasters and sponsors might appreciate a clip like this going viral and kicking up some debate and controversy.

I think much of the issue people have with Raven Saunders is that she’s one of these activist athletes who will win a medal and then get up on the podium and start talking about intersectionality and politics and all the things most people wish we could just keep out of sporting events. So when she then goes and twerks in front of the camera, it’s easy pickings for the haters. How are they gonna feel when Twerking inevitably becomes an Olympic sport in the next few years? Come on, you know it’s happening.

To watch a man literally flip his car after being distracted by a woman twerking on the side of the road, click HERE.