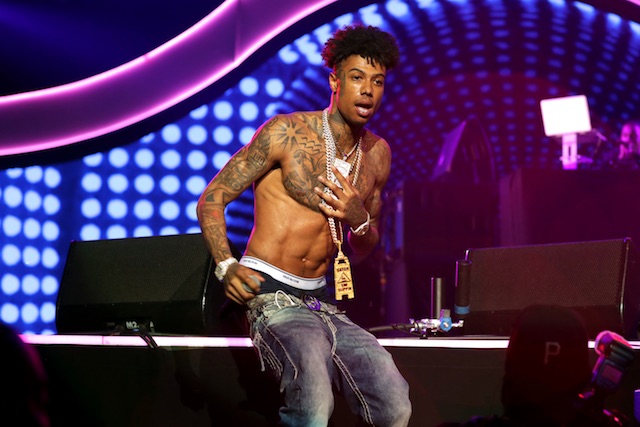 They’re also shown getting tattoos of his logo.

I think it’s fairly well known that R.Kelly is a major creep and weirdo with some of his problematic behaviour towards young women, but it seems like rapper Blueface is determined to continue his legacy for some reason.

The video below went viral over the weekend and shows a whole bunch of women sleeping in bunk beds at Blueface’s house in LA. He’s also heard saying that they need to get tattoos of his logo on their bodies, otherwise he would be kicking them out of the house.

Dawg got the bunk beds like Heaven Gates in the crib pic.twitter.com/ibZWZdbh0U

That’s very weird isn’t it, but apparently the girls are all competing in a reality TV show called ‘The Blue Girls Club’ where they’ll all have their phones taken away, have to fight each other and compete in a variety of different challenges. Not sure if that makes it OK or it’s just kind of a good cover for the fact that Blueface is operating what could definitely be described as a sex cult from his own house?

I guess we’ll have to see how all this pans out, but the internet is already calling his actions questionable and comparing his behaviour to R.Kelly so it’s probably only a matter of time before it all comes crashing down for Blueface like it did for Robert Sylvester Kelly. Here’s hoping at least because it sounds like a very weird situation.

For more of the same, check out when R.Kelly had an explosive meltdown when he was interviewed about his alleged sex cult. Scary stuff.