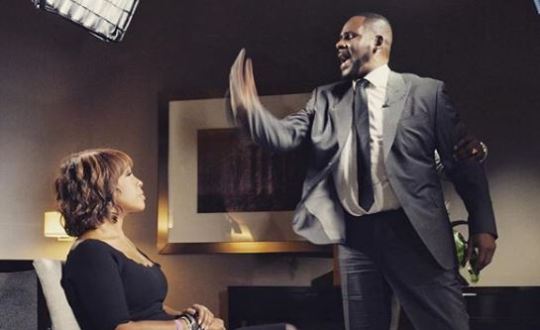 Don’t really know why he thought this was a good idea.

Although people have been talking about R. Kelly and his crepey sex cults and weird behind closed doors sex shit for years, nothing had happened to him legally until last week when he was arrested on ten counts of aggravated criminal sexual abuses against four women, some of which were under 17 at the time.

R. Kelly was quickly bailed for a million dollars after his arrest and has taken somewhat of a strange step in the quest to prove his innocence – he decided to take part in a interview on CBS with Gayle King. The interview on CBS is 80 minutes long. but they’ve posted some ‘highlights’ below as well as a transcript of some of the more important parts, basically it’s really weird is all you need to know, with Kelly standing up and shouting, crying and just losing the plot at a bunch of times in the interview.

I mean even if you just read the quotes it doesn’t sound like someone completely innocent/sane is talking to you. Get a load of this:

I’m very tired of all the lies, I’ve been hearing and seeing things on the blogs. All of them [are lying].

That little girls trapped in the basement, helicopters over my house, handcuffing, starving people, I have a harem or cult.

I don’t really know what a cult is but I know I don’t have one.

If you look at that documentary, everybody said something bad about me.

They was describing Lucifer, I’m a man and make mistakes but I’m not the devil or a monster.

They are lying on me.

Lots of things wrong when it comes to women that I apologise. But I apologised for when I was in those relationships.

I have been assassinated, buried alive. But I’m alive.

I need help. I need somebody to help me not have a big heart because my heart is so big. They keep betraying me.

I apologise for being emotional because this was the first time I was able to say something.

I mean that’s all complete nonsense and I don’t think that doing that interview is really going to make anyone change their opinion about him. Really wonder just what R was hoping to achieve by filming this interview as it’s just made him seem even more weird and definitely guilty than he did before. He’ll probably still get off though, whenever his trial ends up being.

For more of the same, check out this 16 year old girl talking about the absolutely bonkers story of what she calls his sex slave agenda. Her words, not mine.