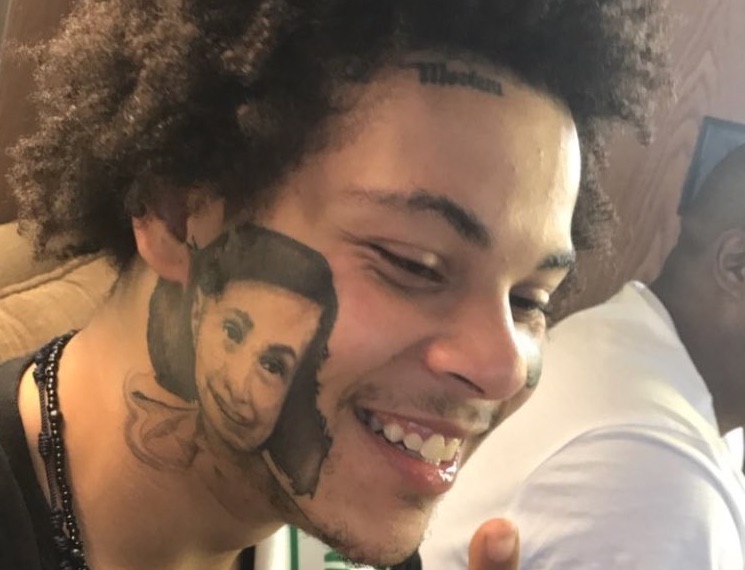 I’m gonna throw it out there and you can call me a prude or whatever, that’s cool, but I straight up think that facial tattoos are really dumb because once you’ve got one there’s literally no way you’re ever going to be able to hide it again. That said, if you’re sure about what you’re getting and it looks cool and you’re happy with it then the best of luck to you – it’s your life go do it how you want to do it.

Unfortunately though, I don’t think anyone can really say that the tattoo of this LA based musician named Arnold Gutierrez was actually a good idea. The guy has decided to get a massive image of Anne Frank tattooed on his right cheek which surely can’t ever be viewed by anyone as an appropriate image to get etched on your face?

Explaining his decision to get the piece, which has already caused controversy after the image went viral, Arnold – who goes by the name ArnoldIsDead in his hip hop collective Xanarchy – said the following:

and now, @Arnoldisnotdead explains his anne frank face tattoo for the people pic.twitter.com/a39cl0CHcr

There are people in history that didn’t have the power to control, to actually do things that they wanted to do with their lives. To be stuck in, like, a house, and end up dying and shit, dude I’m dying to make music. That’s the way I look at it. It’s very black and white.

She ended up getting caught and ended up being murdered and yo – I’ve been put at gunpoint and I’ve had a lot of serious shit in my life before and like seeing that shit, you can’t get any worse than being killed off in your own country.

Seeing like Jewish people come in, in my own classroom and seeing them talk about the Holocaust, like survivors… that shit always stuck to me personally.

I can't for the life of me think of a reason to tattoo Anne Frank on ur face pic.twitter.com/rB2eJloZtH

That clearly makes a lot of sense. Definitely a lot of parallels between Arnold’s life and Anne Frank’s and what they’ve both been through, so it obviously seems appropriate for him to honour her memory with a giant tattoo on his cheek. Don’t really know why I even bothered questioning it earlier and dissing the guy now I’ve heard his perfectly understandable reasons. Guy is a hero.

For more awful tattoos, check out this one which we once labelled the dumbest of all time. Seriously.