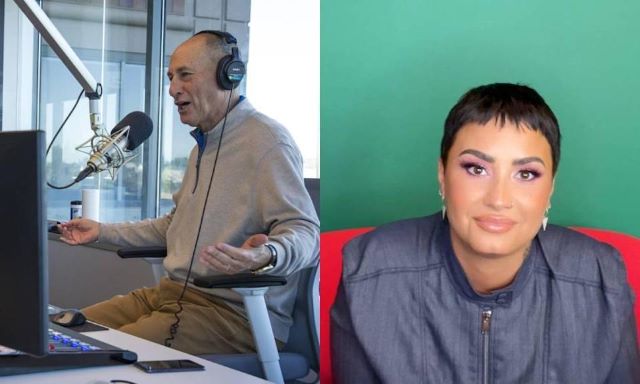 “I’m against her binary thing; I think she’s a troubled woman and a lot of young people are taking her seriously and it bothers me.”

A Boston radio DJ who’s been on the air for 40 years stormed off his own show this week after quitting live on air, after his boss warned he couldn’t joke about the latest celebrity to come out as non-binary – Demi Lovato.

‘Matty, out’: Audio clip of Matt Siegel (Matty in the Morning) @Kiss108 apparently quitting live on the air this morning (via Kevin Doyle) pic.twitter.com/YToNubWkJr

I’m against her binary thing; I think she’s a troubled woman and a lot of young people are taking her seriously and it bothers me. But of course, it’s a comedy show, so I did it in the context of jokes.

We were having fun with it, and my boss called up and said that I’d crossed the line and they didn’t want me talking about it anymore. I responded by saying, ‘If I can’t talk about what I’m thinking at this point in my career, I don’t want to be on the radio anymore.’

Obviously no one out there who is even halfway decent wishes ill on Demi Lovato, regardless of how you feel about the non-binary issue. Lovato and anyone else struggling with gender identity deserve all the support in the world and have the right to live their lives and present themselves the way they see fit.

But if you have even a shred of humour in your soul, you have to allow for a comedian to crack jokes about it. Not every joke is cruel or needs to be banned. Not every attempt to make light of a situation is hateful. The whole motivation around it is to make people laugh which is how Siegel has survived in an ever-changing industry for the last 40 years in the first place; by giving his own, honest takes whether you agree with them or not, and delivering them with humour.

Elsewhere in the article he points out that his boss also made him stop cracking Trump jokes:

So I stopped talking about Trump, and today I’m ‘anti-woke.’ You know the expression, ‘The guy standing in the middle of the road gets hit by cars going both ways?’ That’s what happened to me.

I guess not being able to crack Demi Lovato jokes was the final straw, but from the sounds of it he’s otherwise on good terms with his boss and so maybe they’ll come to some kind of resolution. IMO if a radio DJ is out there making jokes you don’t like, you have the right to say what you want to as well and/or turn the radio off. But we can’t go around banning jokes because a subject is seen to be sensitive or taboo. Fair play to Siegel for taking a stand on it.

For the time Demi Lovato’s Snapchat was hacked and her nudes were leaked, click HERE.