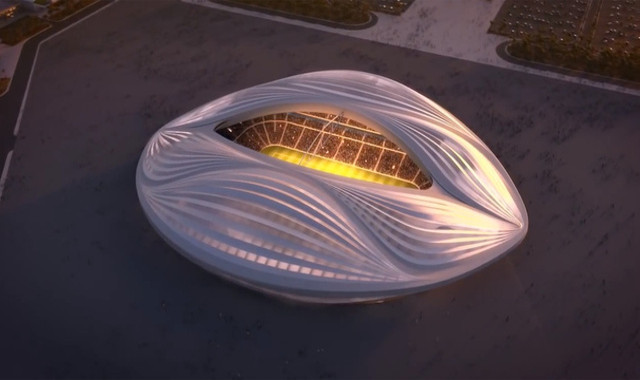 The design for the first stadium for Qatar 2022 has just been released and the internet’s first thought is that it resembles a vagina. What do you all think?

There’s been a big uproar over the Qatar World Cup recently: should it be allowed to be played in the winter, will it be safe and would the people of Qatar be that interested in watching the sport are all questions that have been asked. It seems a new question has arisen. Have they based their new stadium on a vagina?

The design firm who came up with plans say no, insisting it’s based on “the dhow boat that carried generations of local fishermen and pearl divers”. It seems the world disagrees and say that it looks like a massive vagina. It’s intended to house 40,000 people which is quite a lot, it could be pretty tight in there. I imagine the classic “Your Mum” joke will be rewritten to encompass this new architectural marvel; “Your mum is so easy she’s as wide as the Al Wakrah Stadium”. Rolls off the tongue I know.

â˜› Read Next: Top 5 Ridiculous Red Cards In Football, Ever

If it had been designed like this on purpose it could be seen as an empowering symbol for feminism and women in the Middle East, an area that isn’t really known for its liberal views on women. Hopefully now that it’s gone viral the people designing it will acknowledge that it does indeed look like a vagina and use that as a push for more liberal views. Hopefully all this interest in it won’t make them change their mind and the stadium will stay as it is.