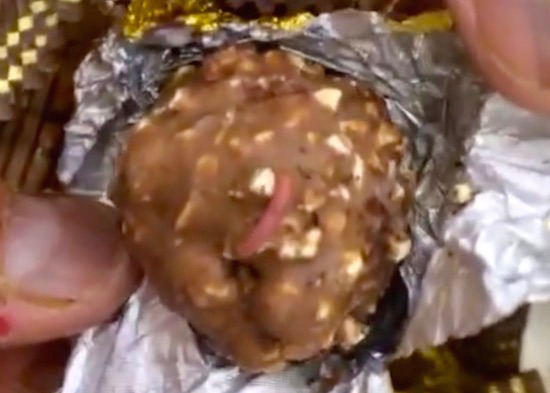 Firstly, I just want to say sorry for being the bearer of bad news. Ferrero Rocher has to be one of the tastiest chocolate varieties going, which makes this bit of news so much worse.

The only glimmer of hope is that this could be a hoax, but I’m not sure why a couple of guys would have such a strong vendetta against the brand. The video shows two anonymous men unwrapping a couple of Ferrero Rocher chocolates. What they find inside is next level disgusting:

Yes, that’s right. Those were tiny little worms wriggling amongst the delicious chocolate filled wrappers. How they got in there we don’t know. All we can say about it is that hopefully this was just a bad batch and it doesn’t mean we have to avoid eating Ferrero Rocher for the rest of our lives. Christmas would never be the same again.

If you’re not suitably disgusted by that video, then check this out. Although don’t say we didn’t warn you.