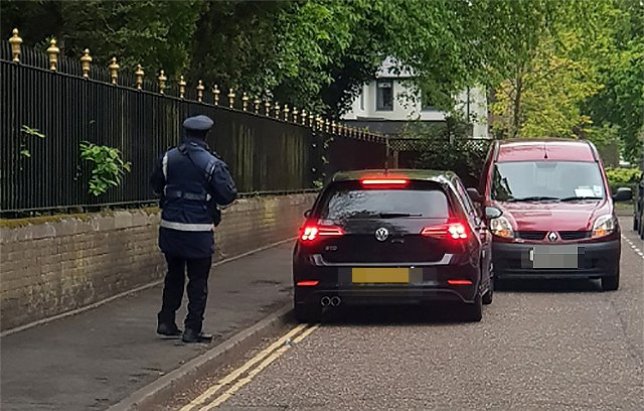 Parking wardens are another breed of awful.

I sometimes think that you’ve gotta be a special kind of dickhead to be a parking attendant and this whole article is going to prove it, as a parking attendant has been busted blocking the road with his own car so that he can give people fines when they can’t get down the road.

This is seriously reality and not an episode of Trigger Happy TV, taking place in place ion Saturday morning in Brentwood, Essex. It was brought to our attention by Richard Austin who posted a video of it on Twitter which since went viral.

Here’s the tweet with a video of the parking attendant caught red handed in the act, as well as Austin’s thoughts on the outrageous incident:

I have just witnessed the the most unbelievable incident. Whilst waiting to drive down a road a @Brentwood_BC Parking Enforcement officer was stopped in the middle of the road, had put his hazards on and then gave the waiting car in front a ticket !! #Unnacceptable pic.twitter.com/kA8WjGx70x

They’re not going to get past each other, are they?

You had the parking warden coming one way in the van and this other guy going other way in his Golf.

The parking warden decides to stop, put his hazards on and then gets out of his van.

He then proceeds to put a parking ticket on one of the parked cars on the side of the road.

The Golf has reversed a bit and I’m behind him and he tries to squeeze through the gap but there’s not enough room, so there he stayed.

Next thing, the parking warden comes over and gives him a ticket for being stationary too long.

But he’s on the main road. It really was like a Dom Joly sketch.

I was watching in disbelief. At first, I thought “why has the car got its headlights on” but then I realised it was his hazards and he was giving out a parking ticket.

The traffic warden then told me that he issued the ticket because ‘he didn’t like the way he drove towards him in the road’.

‘But I said “look you’re a traffic warden, not a policeman” and he said “no I control these roads”.

It was the most bizarre conversation I’ve ever had with a man.

The guy is taking control of the highway himself. He’s a local jobsworth.

I mean yeah, I’ve gotta agree with Austin there. Absolutely no room for this crap on the roads and it totally confirms my theory that you have to be a grade A bellend to even consider that line of profession.

A lot of people seem to be outraged by this prick’s behaviour though so hopefully there’s some kind of petition and he ends up losing his job. We can but hope, right? Can’t really be letting people like this march around trying to rule the world like they often do. Such assholes.

For more of the same, check out this policeman who actually got fined for parking like a twat. That’s what you get.