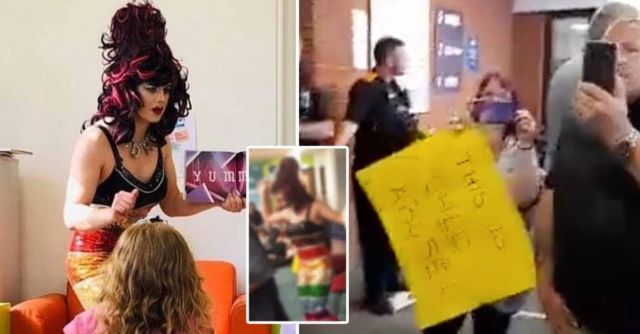 Protesters interrupted the event in Reading after they heard a drag queen was reading to children.

There appears to be some debate over whether drag queens should be reading books to children, and this came to a head during a Drag Queen Story Hour event at the Central Reading library this week.

Sab Samuel, 27, runs Story Hour UK, a project where drag queens read books to children to show them that ‘being different is not a bad thing’. While performing as his drag character Aida H Dee, Sab and the parents were branded paedophiles and groomers by angry protesters who entered the premises:

They accuse the Drag Queen of grooming children and ‘Wokeism’ before being asked to leave.

The activists who used a child as a Trojan horse to enter the Story Time so they could hurl abuse at parents and the drag Queen. pic.twitter.com/0SvQ9eNB0T

‘I think you parents here need to wake up. This is child-grooming taking place and you should be ashamed of yourself for wokism. It’s disgusting.’

She then continued to yell about ‘autogynephilia’ and ‘paedophilia’ before library staff escorted her out. Understandably the kids are utterly baffled and terrified.

So the question is whether it’s appropriate for men dressed as women to be reading story books to children, and I guess that boils down to whether you believe drag queens are inherently sexualised or not. Sab doesn’t seem to think so, as he told Berkshire Live:

‘I find it concerning that these parent groups choose to sexualise situations that are not at all sexual.

There is absolutely no sexual language during any of these shows nor are children exposed to sexual situations. To claim a person’s sole existence is sexual is insulting.’

Surely it comes down to the parents at the end of the day; if you don’t want your children exposed to drag queens reading books, don’t take them to the library that day. These parents made a choice with the motivation being to teach them that there are people out there who act and live differently from the mainstream norms, and that doesn’t necessarily make them a bad influence on children. Even if you do think it’s a bit weird or inappropriate, seems excessive to accuse the parents of being groomers and paedophiles, no?

For the mum of a 12-year-old drag queen who was shocked to find a paedophile lusting after him, click HERE. I guess it can go too far sometimes…