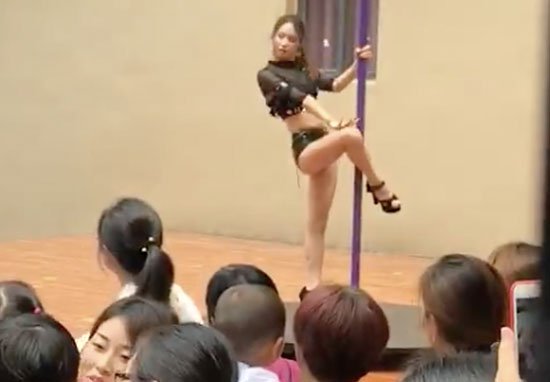 It’s been a while since I’ve headed back to school after the summer holidays, but I’m fairly sure that there wasn’t some big elaborate song and dance about it – you just kinda had an assembly and went to your new classes and begrudgingly got on with it.

It doesn’t seem like this is the way to do things anymore though, as this story out of China is telling us that one school decided to get a stripper/pole dancer in for their pupils in order to celebrate the start of term. Even more bizarrely, this was for a class of kindergarten students aged three to six years old. I mean they’re not even going to really appreciate what they’re seeing are they and if anything it might scar them for life?

Anyway, this actually happened and there are tweets below to prove it that just get progressively and progressively worse as the event continues:

Who would think this is a good idea? We're trying to pull the kids out of the school and get our tuition back. They wouldn't give us the number of the company that owns the school, but looking into that. pic.twitter.com/vEdIhuq774

And they also had a bunch of adverts out for a pole dancing school. The gals in the videos, except for the first one, were not the principal. pic.twitter.com/xj56WegTxG

I mean Michael Standeart sounds like a bit of a tightass with all his tweets, but I’ve gotta say he does have a point there about this being a deeply inappropriate performance for young children to be forced to watch. Apparently some of the kids started copying their moves too and I’m not sure whether to find that kinda funny or kinda disturbing. Probably the latter.

Needless to say, the principal was removed from her duties following this debacle. Apparently she said that she wanted to order some dancers to welcome everyone back into school but didn’t look into what kind of dances they were going to perform. Cool excuse I suppose, but I guess it makes her kind of a shitty principal whatever way you look at it. Deserved to lose her job.

For more of the same, check out these strippers explaining how they should be treated. Always with respect.