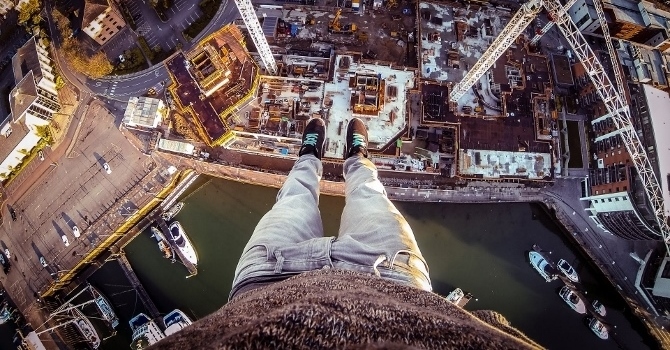 James Kingston, an awesome parkourist, captures his parkour adventures on the streets of Cambridge with POV headcam footage. Absolutely nails it.

If you’ve ever tried a bit of parkour then you’ll agree it’s pretty hard to get to grips with at first (literally) and takes a lot of dedication and time to master. You’ll also agree that when all that dedication and time pays off, parkour must feel as amazing as it looks and when you see all those dudes who are parkour-freaks strut their stuff it brings up a kinda weird feeling because you feel jealous that you’re nowhere near as fit and technically-advanced and brave as those guys but you’re also pretty impressed as they’re laying waste to their surroundings with their TSP (Technically Sick Parkour) and showing everyone else how it’s done.

â˜› This Is Also How It’s Done: Parkour Dog

The first time I tried parkour, it took me about 10 minutes to climb onto a roof and by the time I got to it, my hands and knees were all cut and for some reason one of my trainers had decided to tear itself a new hole and all pebble-dash was sticking into my foot and making little breathing holes in my sole (and soul). I got to the roof and collapsed like a slug. Stayed there for about 20 minutes and decided parkour wasn’t something I should be taking up, went back home and started drinking the cheap bourbon I had left over from a festival. It was in a plastic bottle, still with mud engrained on it, and it tasted as shit as the bottle looked.

â˜› Master The Art: How To Drink Whiskey

Instead of training in parkour, I decided to admire and watch parkour instead. Where I live, the only thing close to parkour is people crawling out of – and stumbling into – the gutters with piss dripping from their flies so there’s no chance of me seeing someone doing it here so I resort to YouTube when my parkour jealousy kicks in. Some of the parkour videos on there are incredibly awesome and makes you wonder whether the people doing it are part of a government campaign to train people in efficient stealth but some videos on there are really shit and cringey and you just wanna tell the wannabe that they’ll amount to nothing but a human sloth, like myself.

â˜›  Like Sloths?: You Might Think Sloths Are Kinda Cute, But If You Check Out Their Skeletons You’ll Realise They’re Totally Terrifying

This is one of the awesome videos. A guy called James Kingston has stuck a headcam on and has filmed himself getting his parkour on around some spots in Cambridge. The guy’s obviously put more than a few hours into his training because he’s pretty awesome. The footage is really clean, too, and if you take your eyes off it you’ll miss something so sellotape your eyelids open for a bit.