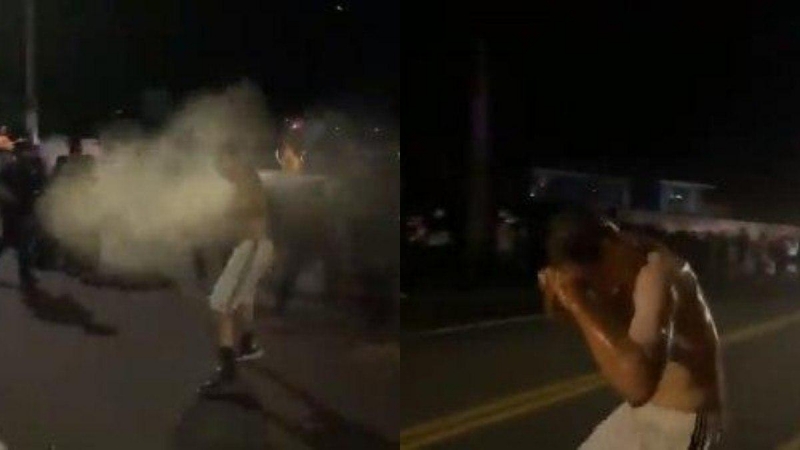 What did he think was gonna happen?

Amazingly, the looting and rioting is still going strong in parts of America as we head into the big November 6th election – which will probably result in even more chaos and destruction no matter what the outcome is.

Over in Portland, one lad was out in the streets and full of beans looking to fight any cop in his vicinity. Well he couldn’t resist the urge to actually charge a crew of fully armed police officers and it went the way you’d probably expect it to:

A man takes off his shirt and wants to fight police at the BLM/antifa riot in Portland tonight. He charges in and is showered with pepper spray. He goes down. #PortlandRiots #antifa Video by @FromKalen pic.twitter.com/zQE2hwGJJ3

Blimey. Can’t believe he went back for seconds! I mean having your eye balls blasted with pepper spray is bad enough without also getting battered by pepper balls while your face is melting off. Everyone screaming for a medic afterwards just made him look like even more of a moron. What the hell did he think was gonna happen?

Like I’ve always said it’s one thing to go out there and protest against police brutality which is something we can all get behind, but is that even what this is about anymore? Personally I find these ‘protests’ quite tired and useless now but they do result in the odd clip of some fool getting wrecked by police, so it’s not all bad news.

This clip is so much more satisfying set to the Cops theme song. 🎵🎶BAD BOYS! BAD BOYS!🎶🎵 pic.twitter.com/kBbIdbWIUM

To watch a badass video of the Los Angeles Crips stopping protesters from looting and kicking them out of Long Beach, click HERE.