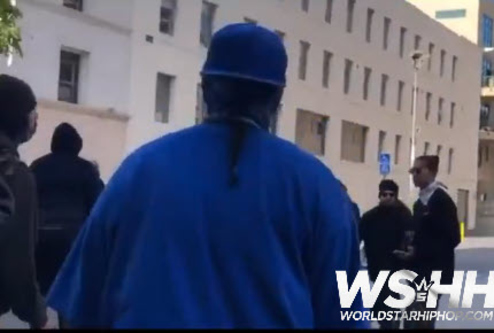 At this point I think it’s safe to say that some Black Lives Matter protesters aren’t really fussed about black lives at all and are just using the movement as an excuse to vandalise and loot property and live out their anarchist fantasies, but as we’ve seen the police departments haven’t exactly been adept at dealing with these idiots.

Good thing then that the LA Crips are around to enforce a little bit of order for a change:

Don’t you just love to see that? Two white Antifa types thinking they can go around and destroy property because they’re supposedly doing it in the same of anti-fascism and Black Lives Matter, only to then be confronted by a hulking Crips gang member and pooping their pants as they scurry away.

Makes you wonder – do the Crips view Antifa or maybe even BLM as just another gang moving into their territory? I’d bet Antifa recognise that the Crips are more, um, experienced than them at dishing out violence in any case. I mean no one wants to see vigilante gangs taking the role of law enforcement but if no one else is going to step in, then what can you do? Crips are business first after all.

To watch a BLM protester attack a looter and scream at him that he’s “not a black ally”, click HERE.