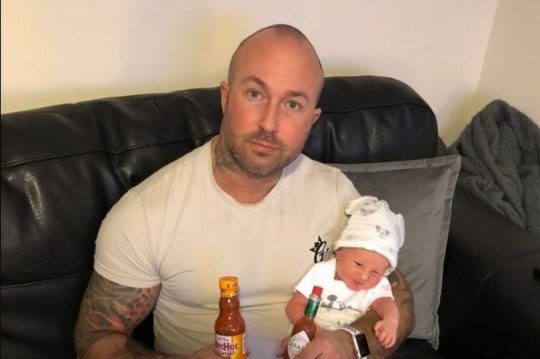 In the age of social media, people are often accused of oversharing too much in their status updates, but I didn’t think that such activity could legitimately lead to a visit from the police – here we are though, as Paul Dawson was left getting the cops after he updated his status about giving his son some hot sauce.

39 year old Dawson was celebrating the birth of his five day old son by Ben having a meal at the best restaurant in the world TGI Friday’s as you do when his partner Lorencia when the latter left the table to go and order. Must have only been able to get seats at the bar. Anyway, Ben wasn’t very happy about the fact that he wasn’t feeding anymore so Paul decided to put his knuckle in his mouth in an attempt to pacify him.

Unfortunately Paul had forgotten that he had just been eating hot wings and still had the sauce all over his hands and this caused Ben to make a bit of a funny face when he was sucking on his knuckle. Of course Paul then had to do what all new dads constantly do and update his Facebook status about it:

Apparently five-day-old babies don’t like it when their dads put their fingers in their mouths after eating hot wings.

Unintentionally by the way. Lol. 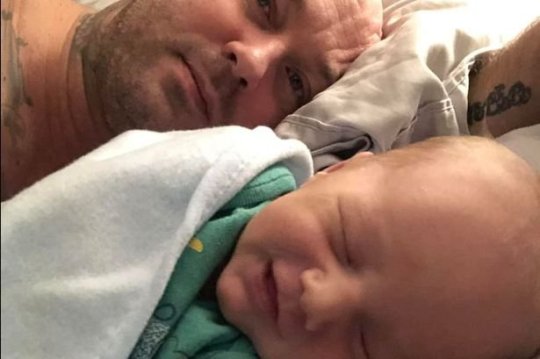 Lol indeed. Sure that status got the likes rolling in, but it also had the unintended side effect of having the police show up at Paul’s house. Paul explains what happened:

I opened the door and asked what was up. They replied “you don’t know then?” and I said I didn’t have a clue.

That’s when they told me that I had apparently been feeding my son hot sauce. I just said “are you taking the p*** , mate?”.

I was actually quite tearful that someone had called the police. My girlfriend then asked the officers if they’d even read the Facebook post.

They hadn’t, so they were shown it and they just looked embarrassed. They apologised and admitted that they shouldn’t have been called and then left.

I mean that literally sounds like one of the dumbest situations ever and a complete waste of time. Hope there wasn’t any actual crime going on in Stockton On Tees that could have been prevented if the police weren’t too busy dealing with this crap.

Paul must be screwing thinking which one of his so called ‘friends’ was enough of a knob to actually call the police on him about this though. I think if something like this happened to me it really would spin me out that I knew someone who hated me that much and was such a prick that they would actually use my status update against me. No real way to find out who was the culprit though unfortunately.

For more of the same, check out this hot sauce that’s claiming it’s the hottest in the world. Definitely don’t give that to your baby.