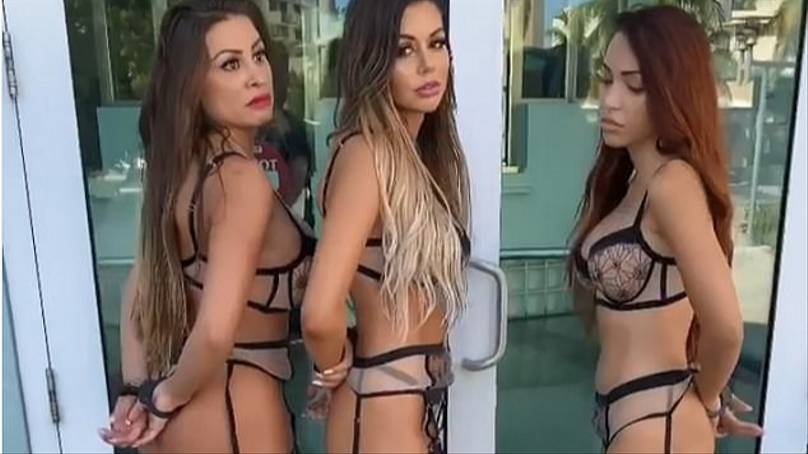 A Miami Beach Police officer is under investigation after he appeared in an ‘inappropriate’ viral video escorting half naked Instagram models in handcuffs into a police station.

According to the Miami Herald:

A Miami Beach police officer has been placed on administrative duty after appearing in a Playboy model’s Instagram video marching three handcuffed, semi-nude women toward police headquarters in a faux arrest.

The video, which has been viewed a combined 1.6 million times as of Monday night, was posted on the Instagram pages of the three popular models — one of whom is a Playboy covermodel.

Officer William Beeker, who the women referred to as Officer Bill, was dressed in full uniform during his cameo in the viral video.

An additional video posted to the Instagram Story of Playboy model Francia James featured a speaking role for the officer.

“Thank you, Officer Bill, for letting us go,” the women — surrounding Beeker — said.

He responds: “No problem. Enjoy the community. I like to protect and serve.”

In fairness to the guy it’s not like he was trying to hide it. It seems like he had no idea that what he was doing was inappropriate and would get him into trouble. These three models in bikinis just chirpsed him into featuring in their viral video and he got so excited he didn’t even think about the consequences.

If you’re wondering, these women are Julianne Kissinger, Maddy Belle, and Playboy’s May cover model Francia James. They all have millions of Instagram followers each and in fact you might remember us featuring Francia’s video a while back when she got ruthlessly molested by that elephant on safari:

The Miami cop will probably just get a telling off for this so it’s not really a big deal, but just goes to show the power and influence some of these IG models have over the common man. I guess that’s how you end up getting paid shit loads to do sponsored posts like these:

For the IG model who was arrested after being revealed as one of Australia’s biggest drug dealers, click HERE.