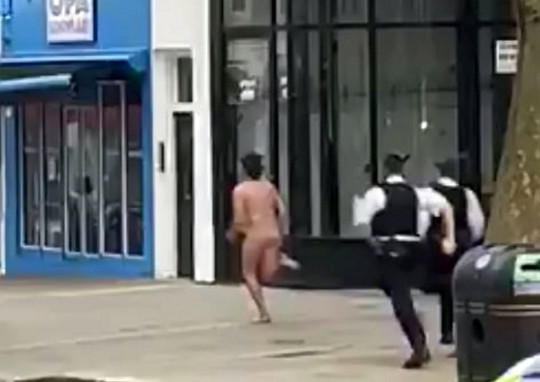 People are saying that this lockdown has been harder than the other two, but one weird trend seems to have come out of it that we haven’t seen in the previous ones: people have been running around naked in London during it.

We had someone running around naked in Central London a couple of weeks ago and this last weekend a 29 year old man named Ross Springham was filmed running around Notting Hill and leading a bunch of policemen on a little wild goose chase. The footage was captured at around 8am on Sunday morning after several people had spotted Springham high tailing it around like a mad man and though it best to contact the authorities about his behaviour.

Here’s what one passerby said about the scenes:

I was out making a delivery on my bike when I looked up and a naked man ran past.

I was checking an address on my phone and just started filming.

I suppose that would be your first reaction to seeing a naked man running around the streets of London that early on a Sunday morning, wouldn’t it? Springham was eventually arrested and appeared in the Westminster Magistrates Court on Monday, where he plead guilty to indecent exposure and was remanded in custody. He’ll be sentenced later in the year.

Any guesses which London borough the next naked man will show up running around in? Or maybe next time we’ll move further afield to somewhere like Norwich, or even Middlesborough?

For more of the same, check out the guy running around central London about a month ago. That was even weirder than this one.