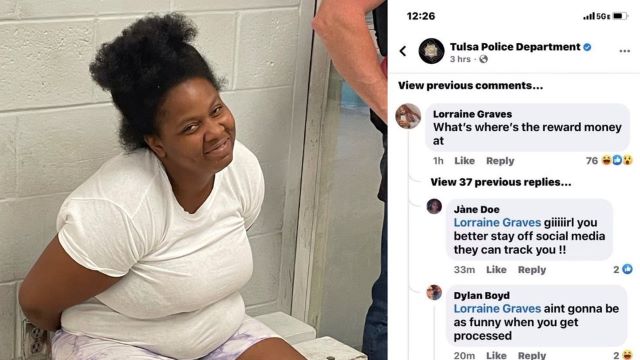 Dumbass of the week goes to a young lady named Lorraine Graves from Tulsa, Oklahoma, who did something so stupid while on the run for ACCESSORY TO MURDER that you could barely believe it.

She commented on a Facebook post by the Tulsa Police Department naming her as a ‘most wanted’ suspect, and enquired about the reward money…

“What’s where’s the reward money at” – classic. Would have been better off just Liking or sharing the post instead of commenting on it. I mean I could appreciate the trolling if she was wanted for a petty shoplifting crime or something, but this is accessory to murder we’re talking about. The best part is she actually looks quite amused by the whole thing while she’s sat there in handcuffs waiting to be dashed into a cell.

According to KTUL, police were looking for Graves in relation to the murder of Eric Graves, a 30-year-old who was found shot dead inside an apartment at the St. Thomas Square Apartments. It’s unclear how they were related at the moment.

Moral of the story – if you’re wanted by police as an accessory to murder, stay off Facebook. Although I’m not sure why if they were able to track her down through a Facebook comment that they couldn’t do the same thing by going to her account and seeing when she last logged in or something. Admittedly I’m not a police detective or criminal justice expert but it just seems like something they would be able to do if they can track you down from a comment.

Either way, tough luck for Lorraine. You live and you learn.

For the crook who commented on his own police wanted poster to defend his shocking hairdo, click HERE. Boy can social media be cruel.