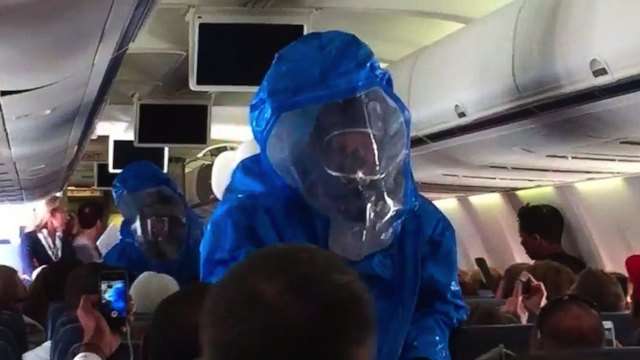 Everyone is pretty touchy about the whole ebola thing right now, especially after the first confirmed cases in Europe, so it probably isn’t a good idea to joke about having it when you’re on a plane.

Unfortunately for all the passengers on a flight from Philadelphia to Punta Cana in the Dominican Republic yesterday, that’s exactly what one passenger decided to do.

After sneezing, the 54 year old man joked that he had recently been to Africa and contracted the disease and that everyone on the plane was going to catch it and die. Pretty funny joke dude. That’s when things got really crazy.

The director of operations at Punta Cana airport ordered the passenger to be evacuated from the plane by a medical team wearing hazmat suits and taken to a separate medical zone, where he was examined and determined not to have the disease. It was also noted that he hadn’t actually been to Africa recently.

He then wasn’t allowed to enter the country and was flown back to the United States to be examined further. Way to fuck up your holiday, idiot.

The other passengers were forced to wait on the plane for a further two hours before they were allowed to disembark. Long. Better than being sucked into a jet plane engine though, that’s for sure.