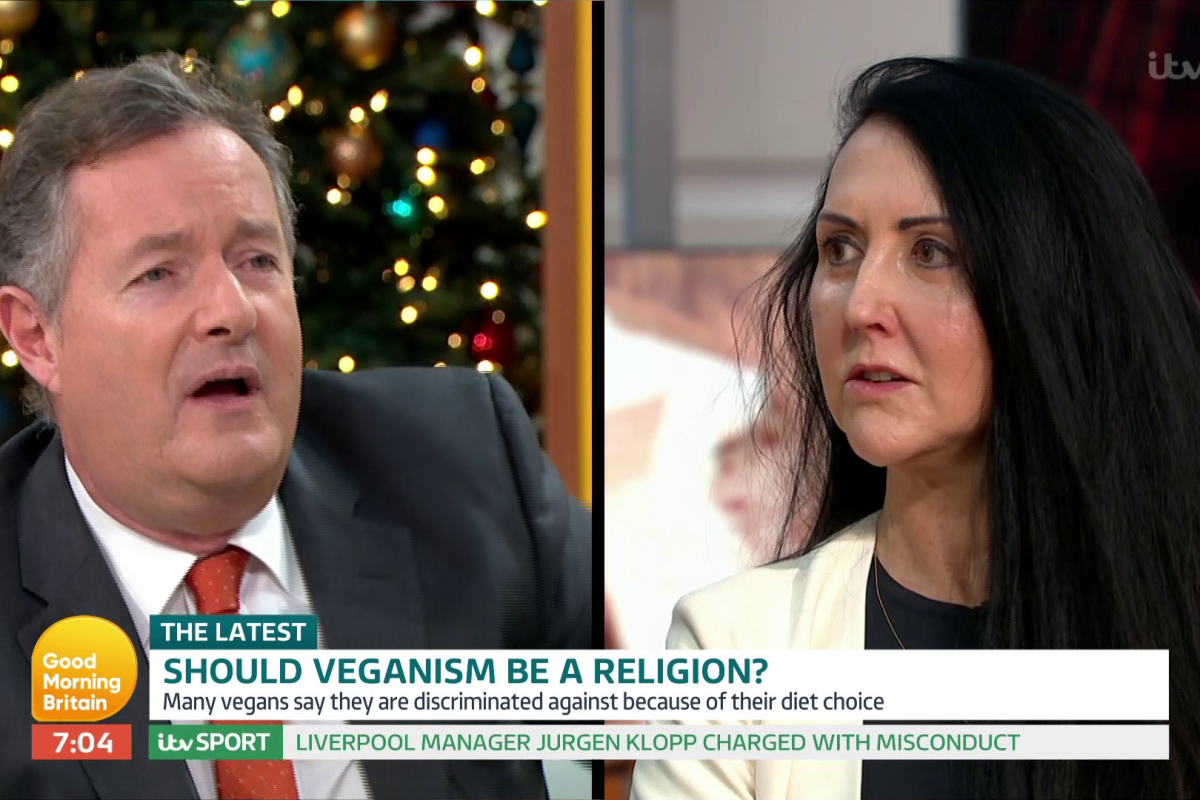 It’s a tough one to call isn’t it – what’s worse: Piers Morgan or vegans?

The two came head to head on Good Morning Britain this morning when morgan clashed with Liz Jones, who is convinced that veganism is the next big social movement in the world and claimed that it should be made into its own religion. Piers of course found issue with this – in fairness it is kinda ridiculous – and decided to go out Jones full pelt, saying that she didn’t care about insect life and betting her £1000 that he would live longer than her.

Here’s the full segment, but you can read some choice quotes from the pair of them below that as well:

Liz: It’s a deeply held belief, it’s a passion I believe in not making others suffer. I believe in the most vulnerable members of our society, which is farm animals, should be treated with respect.

It’s a deeply held belief, it’s a passion I believe in not making others suffer. I believe in the most vulnerable members of our society, which is farm animals, should be treated with respect.

Piers: Shouldn’t you be consistent? That actually no living creature can be killed so you can eat food. If that’s what you really believe… shouldn’t it also extend to everything that involves any killing of animals?’

Well that was silly wasn’t it, and mainly involved Morgan doing his classic interview technique of asking someone a question and then talking over them when they tried to explain their answer. I mean he does have a point about ‘the little guys’ as he calls them, but at least vegans are trying way harder than anyone else to not eat animals and Piers reiterating the same point over and over again just kinda makes him look like a twat really doesn’t it?

Especially when it’s pretty obvious what point Liz Jones is trying to make and he just keeps nitpicking about stuff that isn’t relevant at all really. Classic Piers really – at least the priest came over as quite a cool guy, but I suppose when you’re stuck between a diehard vegan and Piers Morgan even a priest can look pretty cool. Who would have thought it?

Yeah anyway, I’m not really sure about the terms of this bet. I mean how old are they to begin with and how do you classify outliving someone – is it merely living longer than them from the time you made the bet or who lives the longest from the time that they were born or what? And what’s the point of even betting it when one of them is going to be dead by the time it comes around to cash in?

Doubt we’ll ever see a result of that, but I suppose it made a good bit of banter between the two of them. Probably going for Liz Jones though as she looks a bit healthier there than Piers. Just saying.

For more vegans, check out this live in landlord who has banned vegans from living with him. Good idea.