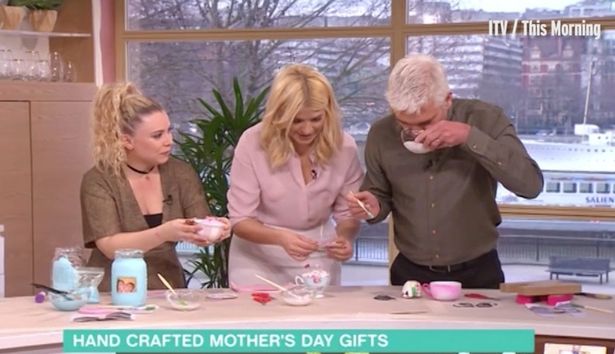 It’s pretty much common knowledge that Phillip Schofield is an undercover wreckhead. He’s been showing up off his face on This Morning for years now. The guy’s a national treasure though so he gets away with it. I mean it’s nothing like what British TV presenters used to get away with right? Plus you don’t really get better TV tag teams than Phil and Holly Willoughby so he gets a pass every time.

Earlier today though Phillip was dealing with some glue on a Mother’s Day craft segment and had a flashback to his school days, completely forgetting he was on live TV and sneaking in a nice, deep sniff of the good stuff.

Holly had his back though and quickly reminded him they were in the middle of their live TV show:

Like I say though – the guy gets the job done. He’s hosted This Morning for what, 15 years now? Plus you can talk to him about anything, even micropenises, and he won’t squirm like Eamonn Holmes.