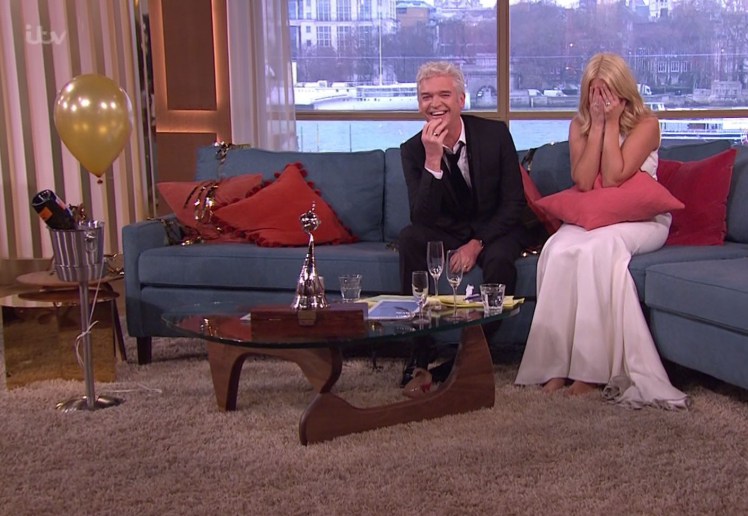 We’re all guilty of it – indulging a bit too much on a school night and then turning up to work in the same clothes that we were wearing the day before. Or having to buy a new set of clothes on the way to work to get away with it. Or just turning up worse for wear. It happens, only most of us don’t have to deal with the whole of the nation seeing it.

As you might be aware, the National Television Awards went down last night and This Morning won a gong for Best Live Magazine show and its stars went out and celebrated in style. So much so that Philip Schofield and Holly Willoughby turned up to present the show in the same clothes they were wearing to the award the night before and visibly kinda wasted. Check out this clip below to see what I’m talking about:

Whoa. Schofield almost sounds a bit like he’s been on the blow there, doesn’t he? Or at the very least he’s still pissed.

The pair revealed that they did a whole bunch of tequila shots whilst still at the O2 arena and then went back to Ant’s house to continue partying the night away. Sounds messy – in more ways than one following that game of Pie Face, although I doubt that was everything they were sticking in their faces – and clearly was as neither of them seemed to make it home to get changed before their gig today. Whoops.

Fortunately most viewers of the show and ITV themselves found the whole situation hilarious. It would be pretty sweet if everyone’s employers thought that when something like this happened eh? I suppose it’s a one off after a work night out but still, I can’t imagine the bosses of most of the people reading this would be too happy with that kind of performance. I guess celebrities get away with that kind of crap all the time though don’t they?

For more highlights from the National Television Awards, check out Danny Dyer making the best speech ever when he won the role for best serial drama performance. Or to see the ultimate television rollover, check out these X Factor losers gurning through their early morning interview.