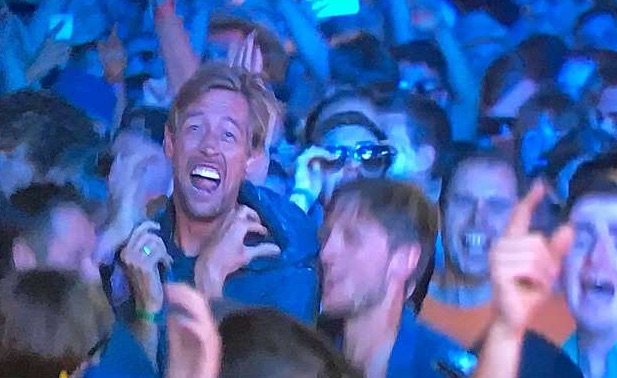 Peter Crouch may have been derided early in his career for being a gangly striker who didn’t actually score that many goals, but it’s safe to say that his unbelievable tekkers for some goals and ability to make fun of himself and not take himself too seriously have turned him into a firm fan favourite in the ensuing years.

Crouch hs been videoed and photographs off his nuts in Ibiza and at several concerts in the past, pretty much just making him an everyman football in an age where most professionals prefer to count their money in their mansions and not engage with the little people. He was at it again this past weekend, heading to the Isle Of Wight Festival to enjoy one of his favourite bands Kasabian and rock out in the mosh pit.

Of course, his actions were filmed by several of the people up there with him and he even got a shout out from the band himself on stage. Check out the footage below:

I don’t use this word often but what an absolute lad. Love the fact that he’s just going there without a care in the world and getting involved even though he’s obviously a major celebrity – you just don’t see that that often.

It’s also pretty funny that he seems to be on his own so mad respect to him for actually being into the music and heading out down to the front to rock out. Again, you very rarely see something like that from your mates sometime, let alone someone as big as Peter Crouch. Just a shame he isn’t moshing to someone cooler than Kasabian, but I guess you can’t expect everything from the guy.

For more Peter Crouch, check out this video of him off his face in Ibiza a couple of years ago. Nice.